We conclude our weeklong spotlight on Drasmyr with the second part of our interview with Author Matthew D. Ryan.

Cirsova – The world, history and setting in Drasmyr seem pretty developed, with the first book just scratching the surface. How much more of the world are we going to be seeing as the ‘From the Ashes of Ruin’ series unfolds?
Matthew D. Ryan – Most of the action of the series is going to remain focused in Drisdak and its immediate surroundings. At least for the first two books. Then there will be a lot of action in a kind of pocket dimension, and in the last book everyone is going to Hell. As for the world of Athron, it is fairly well developed; I have far more material than I’ll ever actually use because it was originally intended as a setting for a gaming campaign. I may write a few books that take place in other parts of the world once I’m done with From the Ashes of Ruin, but for now, staying around Drisdak will likely suffice.

C – This may be an author’s secret, but how far along do you have your stories planned in advance?

I only have a vague idea on how the series ends and I’m writing toward that end. The original draft of Drasmyr was written (almost 20 years ago now) stream of consciousness. For The Children of Lubrochius I plotted things out in advance for the whole book, then wrote accordingly, though I did give myself permission to remain flexible. I’m working on The Sceptre of Morgulan now and I’m using an outline for that as well.

C – You mention that part of your inspiration comes from years of AD&D; were there any published modules or specific homebrew campaigns that were particularly influential on your work as a writer and game designer?

R – That’s a really tough question. I think they all had some influence to a certain extent. If I had to pick out a single one, I ran a vampire campaign for some friends back when I was in college. It was a female vampire with powers more similar to Drasmyr than the powers listed in AD&D (it actually had to bite to drain; claws wouldn’t do it). But that was so long ago, I’m not really sure which came first, the campaign or Drasmyr.

C – After your experience releasing and promoting Drasmyr and The Children of Lubrochius, which came out this week, what is some advice you might like to give any aspiring fantasy authors?

R – Write as much as you can. And don’t give up. With the way the Internet is now, it’s easy to get feedback on your writing and even self-publish on Smashwords or wherever when you’re ready. But make sure you are ready before you self-publish. I’ve read a number of less-than-stellar books that I’ve downloaded. I would advise seeing if you could at least get one short story published on an ezine as a kind of measure of your writing ability before you start cranking out self-published novels. Then, let your muses sing.

R – The plan for the series, From the Ashes of Ruin, is for one prequel, plus four additional books. Just figured I’d throw that out there. Final thoughts, well I hope you and your readers enjoy my books and become steady fans. And I want to thank you for doing this interview and giving me an opportunity to connect with your readers. I think that about sums it up.

Thanks again to Mr. Ryan for taking the time to talk with us about his book here at Cirsova.  You can follow him over at his own blog, A Toast to Dragons (it’s over on my link list), and check out his books at all of those great online sellers I listed monday. 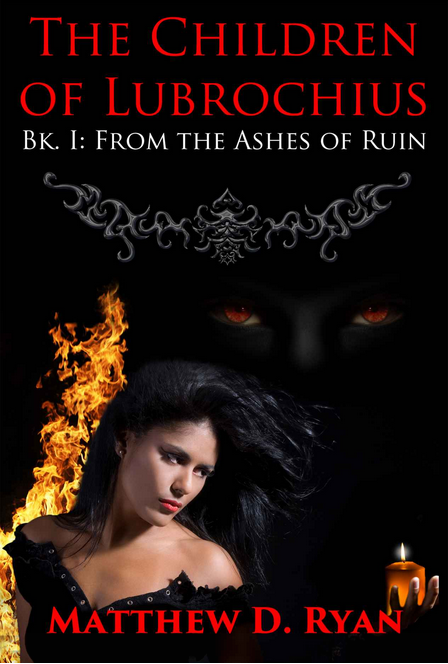