…And Then There Were None appeared in the June 1951 issue of Astounding Science Fiction.  I PROMISE I will finish 02/74 M of F&SF later! 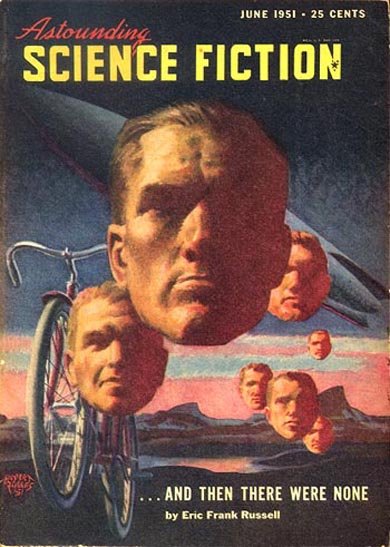 Well, there WAS a bicycle in the story!

No, this one didn’t have anything to do with Agatha Christie story by the same name. Erik Frank Russell’s short story is the final piece of what would eventually become The Great Explosion, the satirical saga of an attempt to reunify human worlds by interstellar ship several hundred years after a diaspora that saw various cults, sects, etc. leave to find their own space and make room on Earth. Sound familiar?

…And Then There Were None starts out feeling like a joke that begins to run a little long. I don’t tend to care for this sort of satirical sci-fi story, as they often feel like they’re trying too hard and being precious. I slog through them and wait for the payoff and groan, because it’s usually some sort of bad pun that I saw coming from a mile away. Well, about half-way through, …And Then There Were None finally tells its joke, the punchline is about what you’d expect, and then the story gets interesting.

The spaceship has landed on a world where no one cares that a starship has landed, no one has time for the pretentious ambassador of earth, and everyone just wants them to “MYOB!” (Spoilers: the punchline of the joke is Mind Your Own Business) I’ll grant that it does a bit of a misdirect, alluding that the people of the world speak in purely literal terms (like in in deCamp’s Undesired Princess), but that’s merely an affectation of their speech. The inhabitants, the Gand, as they call themselves (after Gandhi), live by practice of an obligation based economy combined with the maxim “Freedom – I won’t”. Everyone does what they have to do as obligation requires, but if not, they basically will tell folks to “MYOB”.

Once it shovels through the initial mess of the setup, …And Then There Were None gets moving along nicely as the spacemen contemplate the implications of the planet’s philosophy which ultimately leads to a breakdown of discipline as soldiers realize that if enough of them tell their COs to screw off, there’s nothing they can do about them.

I’m split about 50/50 on this one; the first half was the sort of boring and predictable sf humor that I’m really not a fan of, but the second half was deliciously subversive, and I found myself wishing that more people were willing to live by the “Freedom – I Won’t” maxim. So, I’ll say that it averages out to a pretty good story. And looks like that throwaway line about the planet of fanatical nudists is expounded upon in its own chapter in the collected edition of the Great Explosion, so there’s always that to look forward to.

Unlike some of the other stories I’ve done Short Reviews for, this one is available to read for free online.