Moon of Danger by Albert de Pina appeared in the Summer 1947 issue of Planet Stories (Vol 3. No 7).  Note that I incorrectly labelled Mo-Sanshon! as being in the Spring issue.  To avoid further confusion, I will be including the specific volume and issue numbers for future Planet Stories short reviews.

Albert de Pina’s novelette is by far the best written of the stories I’ve read in this issue so far; though some of the hallmarks of deadline writing can be seen in “Moon of Danger” (accidental or intentional repetition of adjectives close to one another, rushes through certain sections and flat characterizations), overall it’s a tightly written and evenly-paced story.  Frankly, I’m surprised Fox’s story was on the cover and not this one.

Moon of Danger has all of the hallmarks of classic early post-war space-opera: chemical and atomic weapons, dangerous radioactive materials and threats of large-scale devastation wrought by high-tech warfare.  Mars has been ravaged by a radio-active biological agent that can quickly corrode metal; the last of the Martians have decided to pack it in, hop on the refugee ship and head for Earth before the last “Ionization Towers” give out.  The Martian effort is threatened by an Earth faction, including a mutinous Fleet Commander, who’d rather blow the Martians out of space than risk letting the spore plague reach Earth.  In an early twist, it’s revealed that the plague was unleashed on Mars by the denizens of Phobos, thought long dead for hundreds of years, in retaliation for the genocidal wars between the planet and its moon.  The ruler of the Phobians doesn’t care that those wars happened centuries before he or the current Martian Queen were born, he will use the looming Earth civil war over the Martian refugee crisis to force full recognition of Phobos as a prime federation world or else unleash his plague on all the other worlds.

Phobos has been hollowed out, and a powerful reverse-gravity generator has been installed at its core.  So, in one of the coolest “George Lucas almost certainly read this” moments in sci-fi I’ve come across, the heroes end up flying two linked ships towards the core of Phobos, delink from the ship full of atomic bombs, and before the bomb-ship hits the grav generator, ride the gravity wave toward the moon’s surface before the plant, Phobos and all the Phobians are blown to hell.  That part was even better than when the hero had to keep killing drug-addict Phobians with his bare hands while working in the slave fields cultivating bio-weapon spores!

It’s crazy just how little I can find out about de Pina; there are only about a dozen stories to his name.  I’m hoping that out of the dozen issues of Planet Stories I now have that there are a few more by him.  If anyone has any info on this guy, let me know!  Sorry, I tried my best to find either a scan or transcript of this one, but it looks like you’re going to actually find a copy of the 1947 March-May issue if you want to read it.  The awesome page & a half illustration showing Ric (the hero), Tal (a Martian scientist) and Praana (Queen of Mars) fighting their way through a crowd of Phobian slave-workers who are rioting because the rulers have been sitting on a huge stockpile of drugs sadly is also unavailable online. 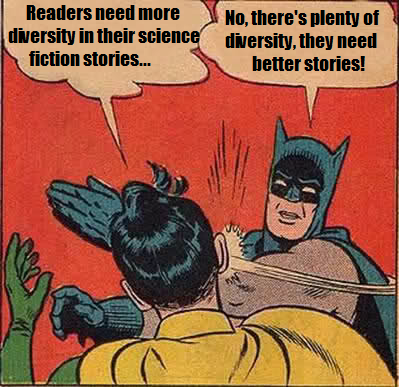 In other news, in the last 24 hours, I may have convinced at least two people to check out Leigh Brackett!