The Martian Circe by Raymond F. Jones appeared in the Summer 1947 Issue of Planet Stories (Vol 3, No 7).

The more “old” science fiction I read, the further the scales fall from my eyes.  While I’m at the tail end of Gen X, I grew up on a lot of 60s and early 70s psychedelic music by way of my parents (my mom is more oldies & classic rock, but my dad is still all about the weird and out there stuff from that era).  So, needless to say, I’ve thought a lot of things in terms of “the psychedelic 70s”.  Yeah, I know the 60s had its share of drugs and psychedelic rock, but it was the SCI-FI psychedelic 70s!  Hawkwind was in search of space, Good Thunder’s moonships were spreading their sails, BOC (NOT Boards of Canada, mind you) were climbing a stairway to the stars, Bowie was praising the supermen of the stars, and Led Zeppelin were singing about Hobbits.

The shocking truth is that Rock & Roll was a good 20+ years behind Science Fiction in terms of psychedelia.  Where would we be if Glenn Miller had demanded of our grandmothers to not drop LSD under the Martian Sea with anyone but he?  The Martian Circe is the 3rd story I’ve read in as many months from the 1940s in which hallucinogenic drugs play a significant role.

Tell you what.  I’m not going to actually review or talk about this story.  I’m just going to show you this picture and tell you to read it.  NOW, GO READ IT NOW! 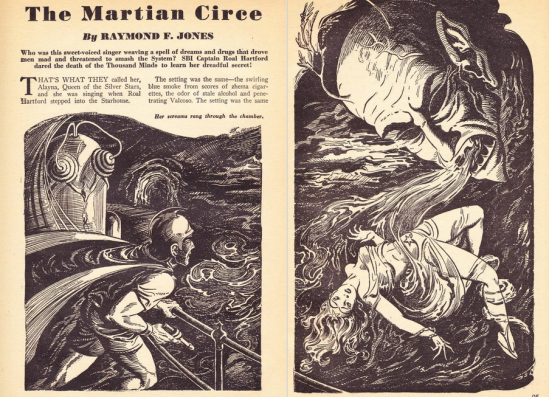