I wanted to respond to a comment over at the Castalia House blog in regards to Appendix E, 5e’s answer to/updated Appendix N.  At one point, I’d had something typed up over there, but the comment was eaten because I wasn’t logged in.  Rather than try to retype it, I decided to rethink it and take an opportunity to talk about Record of Lodoss War.

“I’d argue that Appendix E, along with the other 5e appendices, has more to do with filling the pipeline with more fantasy product. Mechanically, World of Warcraft has a more visible influence on the game design than most of the Appendix E additions. But the fantasy genre has reached a point where it is flooded by authors who recycle campaigns and characters into novels, to various degrees of success. Appendix E is designed to fan the world building bug as Ahmed, Lynch, Rothfuss, and Sanderson earn their places via their settings and not by their contributions to fantasy gaming tropes. (The first three are rather generic in character and ‘class’, while Sanderson’s magic systems are so strange that no correspondence to D&D caster classes is possible.) By promoting world building, Appendix E hopes to inspire the Next Great Fantasy Saga, or at least the next Lodoss War or Slayers.”

The invocation of Lodoss War really touched a nerve for me.  Don’t get me wrong, I loved Lodoss Wars, and I think it’s a thing of beauty, but not because it’s a good show or tells a good story.  Lodoss Wars is perhaps one of THE most Pink Slime of Pink Slime fantasy stories, such that when I’d seen it, I began pondering and crafting all sorts of theories about Occidentalism.

You see, Record of Lodoss War is what you get when you try to craft a western style fantasy adventure when late 80s Dungeons & Dragons is your primary exposure to western style fantasy.  Based on a group of Japanese D&D players’ session logs, Lodoss emerged from a culture where the western fantasy canon we take for granted is, if not completely absent, simply not a shaping force.  The result is stark and strange and perhaps gives us a look at what the game looks like from the outside looking in devoid of the context of classic SFF. 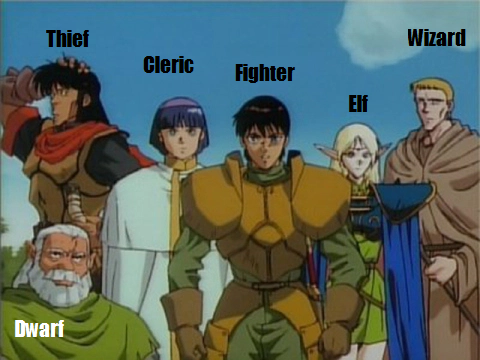 Record of Lodoss War tells the story of a Fighter, a Wizard, a Thief, a Cleric, a Dwarf and an Elf fighting goblins and orcs, an evil king, his evil fighter, the evil fighter’s evil elf girlfriend, an evil wizard with an army of dragons, and the lich whose spirit is in a piece of jewelry orchestrated the whole thing.  Some of the cheese is almost terribad!  For instance, whatever the elf casts her spells on seemed to always make their saving throws.  I just felt awful for her!  Not to mention, I think she might’ve been slow or something.

Lodoss Wars tries so hard to be grim-dark before grim-dark was an in thing.  Episodes begin with the haunting phrase “Lodoss… the accursed continent…”  But for all of the beautiful artwork (and Lodoss IS gorgeous) and impressive set pieces, it comes across as just feeling so incredibly empty. Interestingly, the advertisements for Lodoss used its D&Dness as a selling point (‘for people who like Dungeons & Dragons’ or somesuch).

Appendix E should be trying to inspire DMs to create games worth playing, but WotC showed their hand by including all of their branded D&D fiction.  I’m surprised they didn’t include the Magic: the Gathering books, as well.  Appendix E feels less to me about offering inspiration and more for ensuring a branded D&D experience.  Because of the nature of the game, everyone will bring to the table their ideas and play styles and DMing styles; but if D&D is trying to inspire the “Next Great Fantasy Saga”, Record of Lodoss War shows us the sort of cold sterile high fantasy that can result from D&D in vacuum.

I do think I should make a note about Slayers, as it was brought up in the comment as well.  Slayers may be the other side of the Lodoss coin, but I don’t know if that does it justice.  Slayers is very self-aware and lampshades a lot of the cheesiest D&D fantasy tropes; of note, in nearly every season, the big twist reveal is that the main characters’ murder-hoboing has played right into the hands of whatever the big bad was scheming, and, in the end, it is somehow always Lina Inverse’s fault.  You get Lodoss when you’re trying incredibly hard to capture not actual western fantasy but D&D; you get Slayers when you take the sort of fantasy you get from D&D and mock the hell out of it.

I’m seriously not trying to take the piss out of Lodoss; it’s one of the most beloved fantasy franchises in the east, and has a number of redeeming qualities (namely art and music), but if you watched the first episode above and are familiar with the classic fantasy canon, you’ll totally get what I’m talking about.

Later today, I have something of a guest post from one of the guys at my table.