In the classic 1963 episode of The Outer Limits, “The Zanti Misfits”, an alien race has decided to send its criminals to Earth, more specifically the US. The Zanti’s instructions are not to interfere, allow the criminals into the US and to respect their privacy or face the consequences.

The really scary part of this episode is the US government’s acquiescence to this hostile external power, how cowed they are, how they do not dare risk offending the obviously intelligent and peaceful Zanti, and when things go wrong and people start dying, it’s obviously our fault for not respecting the Zanti and doing what they say. The US Government are, rather than willing to protect its citizens from an external threat, complicit in allowing dangerous and hostile aliens into the country. 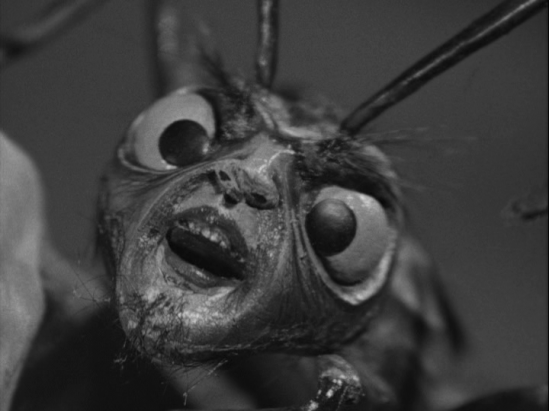 Eventually, they are given no choice but to kill the Zanti Misfits, but they certainly could’ve avoided the loss of US life by blasting the Zanti out of the sky before they landed.

Anyway, I thought this episode was worth commenting on as I’ve noticed that a lot of the non-comedic, non-sword & planet pulp SF I’ve read lately more closely resembles Outer Limits than other filmed SF I’ve seen, and Outer Limits is one of the few bits of filmed sci-fi that does justice to written sci-fi. It treats its stories with the degree of seriousness and effort that was given to the non SF pulp genres in classic film. Of course, the Cold War bleakness I’m beginning to see in late 40s written SF is apparent in Outer Limits in spades, so you’ll see more like The Ordeal in Space or The Venus Evil than Beer-Trust Busters or Grifters’ Asteroid. I still don’t know that you’d ever be able to dig up anything film-wise from the black and white era like the detective noir sci-fi Red Witch of Mercury, but Outer Limits holds up, especially if you’re a fan of written pulp sci-fi.

5 responses to “The Zanti Misfits”