[Incidentally, Cirsova Publishing’s trade paperback of The Enchantress of Venus is out today.]

I’d planned to talk a bit more about plot of The Enchantress of Venus, but unlike so many of the stories featured in Short Reviews, this one is readily available online and for free as a work in the public domain, so instead I’ll focus mainly on the Enchantress herself.

Damsel clearly not in distress. That guy on the other hand…

Eric John Stark has returned to Venus in search of his friend Helvi, who has gone missing while searching for his brother.  Sensing that the pirates he’d been sailing the Red Seas of Venus with are going to pull a fast one on him and sell him into slavery, Stark dives into the thick red mists.  What ensues is a compelling drama about the last of a decadent and inbred family, the Lhari, who rules over the pirate port and uses the labor of captive to excavate the ruins of a lost reptilian race at the bottom of the bay, where the secrets of an ancient life-shaping weapon supposedly rests.

Enchantress of Venus is a slow burn compared to some of Brackett’s other stories, but the atmosphere she creates is as thick as the gaseous seas. The Lhari, particularly Varra, the titular villainess, are delicious in their cruelty, not just to those they oppress, but to each other.  While Ywain’s cruelty in Sword of Rhiannon stems from striving to be more like a man, the son her father didn’t have but needed to hold onto the empire, Varra’s cruelty comes from a place that is utterly feminine and biologically needy – the Lhari are dying out in no small part because they are horribly in-bred, as they look down on the other races and will not mix with them; Varra knows that if she’s to have any future as a ruler, it will not be as her cousin’s bride.

END_OF_DOCUMENT_TOKEN_TO_BE_REPLACED

An all new edition of Leigh Brackett’s classic planetary romance, fully illustrated by StarTwo and with a foreword by Jeffro Johnson, author of Appendix N: A Literary History of Dungeons & Dragons!

Byron Roberts, the lead vocalist, has a new book out from DMR Books. I enjoyed his piece from Swords of Steel, so this is probably worth checking out!

The Lost War is one heck of a read from Karl K. Gallagher!

While he’s best known for his hard SF interplanetary adventure-turned Mil-SF Torchship series, Karl has dipped his toes in fantasy before with his story for us, Squire Errant, so I was very curious to see what he was going to be doing with a “portal fantasy” (that’s isekai, for your weebs out there).

The Lost War is the story of a historical re-enactment event/fair that gets sucked into another world. Using their skills, the hobbyist craftsmen, fighters, and other olde tymes enthusiasts must band together to survive. A few members begin developing magical abilities that help them in their day to day struggles.

The Lost War begins as something of a critique of anarcho-feudalism–it falls upon the “ruling couple” of the event to take charge de jure and the administrator to take charge de facto, which leads to some issues early on–but things smooth out a lot when the “queen”, who’d developed magic powers of mind-control, gets a pair of scissors through her neck.

It moves more towards action survival adventure once “orcs” show up and the feudal band has to go to war with the local parasitic bipeds. It builds predictably but rewardingly towards a climactic battle and semi-happy ending for one of the main couples. There’s a bit of mystery box stuff that’s not really resolved (nevermind that they’re all still stuck in the fantasy world) but will likely be addressed in subsequent installments (the first of which is already out).

Also, don’t forget that both Enchantress of Venus and the new Cirsova Summer Special will be out in the next couple of weeks!

Ganon from The Legend of Zelda series is one of the most iconic Nintendo villains, despite having undergone a number of redesigns and reimaginings until his current incarnation solidified sometime around Ocarina of Time.

Prior to Ocarina’s wholesale reboot of the Zelda universe*, Ganon had usually been portrayed as an old-school orc pig-man. 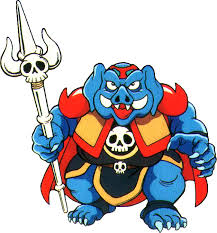 When he became a large-nosed, dark-skinned desert nomad, well… here we are in Current Year, with this being considered problematic for reasons. [Seriously, there are arguments that the Gerudo are supposed to be Semitic, and Ganon is an offensive Jewish stereotype].

One of the most recent high-profile examples has been some fan-art that came under criticism because Ganon’s nose was TOO exaggerated:

Now, the interesting thing about this art that the artist got pilloried for is that it presents Ganon with a more bird-like nose.

First, here’s the Garuda, who was a villain in Zelda 2, both in SE Asian art and as Boruba, the Thunderbird in 8-bit.

The Gerudo tribe, of which Ganon is a king, have bird-like facial features and bear a striking resemblance to icons of Garuda:

Garuda is known as The King of Birds, and Ganon is shown as both a King of birdlike people and as having command over birds, such as the rocs in Windwaker. There’s also the possibility that the Thunderbird which Link faces at the end of Zelda 2 is just another aspect of Ganon.

So this is a far more likely reason for why Ganon has that big-honking beak than that the Japanese were making a dig at middle-eastern people.

*Pre-Ocarina fanon used to hold that the chronology was Link to the Past, Zelda 1, Zelda 2, then Link’s Awakening, all featuring the same Link.

The Summer Special will be out June 3rd!

The Bullet From Tomorrow
By MISHA BURNETT
A mysterious visitor claiming to be from the future has a simple job for Private Investigator Butch Norton: sabotage an airplane to prevent World War III!

The Star-God’s Grave
By SCHUYLER HERNSTROM
A young sorcerer’s apprentice steals a starship from his master… only to be pressed into the service of a pair of space hussars to undertake a perilous quest!

Bleed You Dry
By SU-RA-U
A simple news assignment—talk to the reprobate son of an aloof dying billionaire—leads one small-town reporter down a trail of death and madness!

The Last Fortune of Ali al’Ahmar
By REV. JOE KELLY
No search for treasure is ever easy, but the hoard of a legendary pirate sought by a shifty client steeped in sorcery may prove tricky for even Sudah’s tough crew!

Halcyon
By CAROLINE FURLONG
An interstellar war has spilled onto the planet Halcyon, where humanity finds an unexpected ally in their fight against an alien race and their sinister masters!

We should have the Summer Special populating out to distribution channels very soon, after which point we’ll officially announce pre-orders are live.

If you subscribe to our mailing list, we’ll be sure to send you an early link to the spring hardcover as well as a discount code to use with it.

And since we’re gearing up for summer, be sure to grab some summer gear!

Halcyon design is now up in our TeePublic store.

Only $13 for the next soontime! 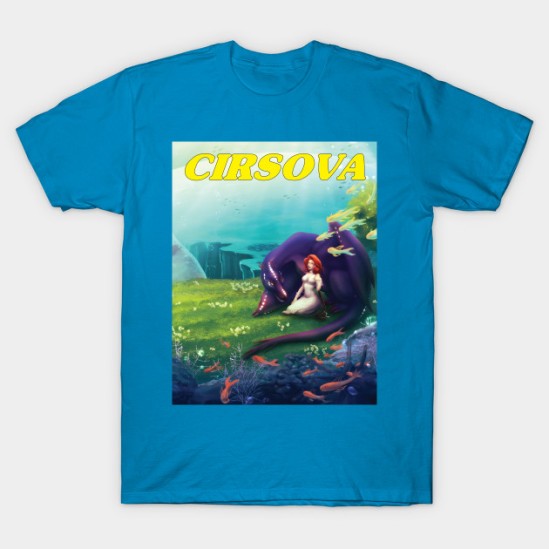 Cirsova Contributor J.D. Brink’s anthology, Green-Eyed Monster, is out now and on sale through Mothers’ Day for .99 digital.

If you’ve enjoyed his Leonidas Hawksblood space pirate stories in Cirsova, now’s a good time to check out some of his other works!