For a number of years, people have pointed out the publishing industry is overwhelmingly geared towards women, in positions of leadership, in terms of authors published, and in terms of audience.

I can’t count how many times I’ve seen the question “Why don’t more men/boys read?” Well, a big part of the answer is that the industry is more or less run by and for women.

She does present some interesting and troubling numbers that do show how misweighted the publishing industry is. 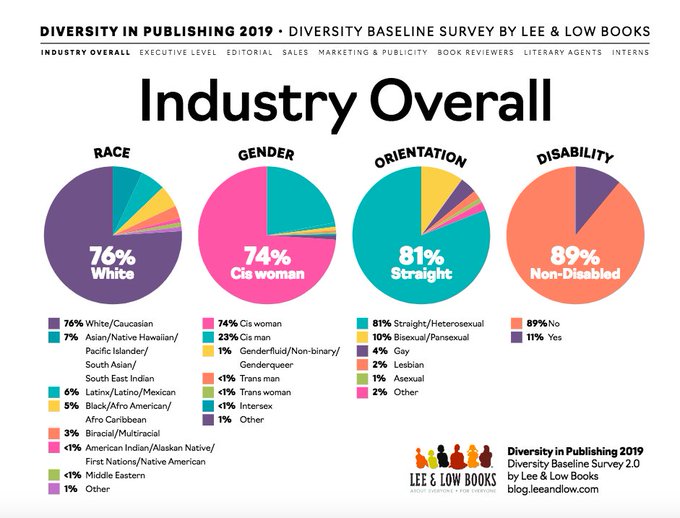 In this industry overall, disabled persons, LGBT, and women are significantly OVER-represented compared to the general populace. 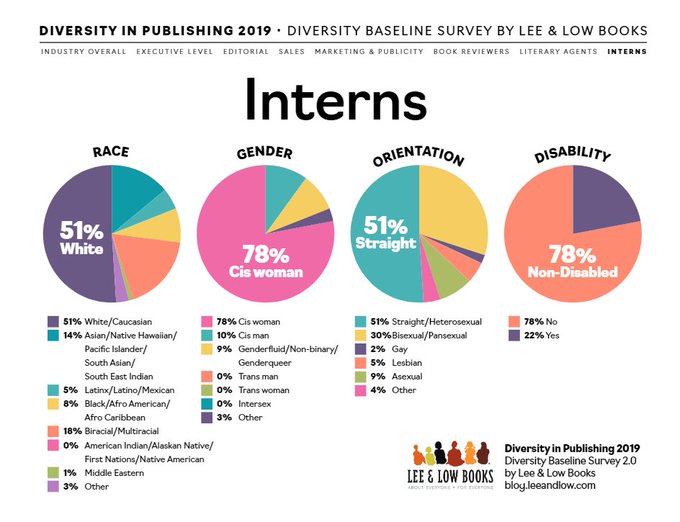 Among interns, the numbers are even more skewed.

The demographics of big publishing heavily favor gay women of any race compared to the actual demographics of the general population, which very well could account for WHY the market looks the way it does.

Efforts to meet market demands create something of a feedback loop; certain groups feel excluded by the product and therefore do not consume them; the industry sees those groups as non-consumers and therefore gears its production to meet the tastes of the groups that ARE consuming, further excluding other groups.

So, even though it’s kind of a meme that publishing has become the domain of cat-ladies, simping male hangers on, and the few folks that can fly under the radar, there are concrete numbers that show there may be some truth to it.

It’s shocking to think that less than 1/4 of those in the publishing industry are men, and only 1/10th of the interns who are interested in learning and participating in the industry are TruMalesTM.

Blacks, and I’d especially suspect black males, are also critically underrepresented, and I can’t help but think that a part of this is an exacerbation of the young male readership identity crisis along racial lines. In school, the written black experience was almost always from a female perspective. We would be handed the tragic tales of young black girls suffering abuse at the hands of men, who were black as often as not. There were few male heroic ideals presented in fiction at school, and virtually none were black.

Because of the nature of the beast, I don’t see any real change in the industry beyond becoming more LGBT focused and slightly more focused on minority women, if they find that those markets will consume everything that’s put on a plate in front of them. We’re still in a spot where “diversity” in publishing is actually a form of exoticism, where the big publishers can put their “diverse” stories on display like cakes in a desert case. There’s buzz around them, but at the same time, there’s the danger of “doing it wrong”, which has already led to the public crucifixions of several YA authors who either were not woke enough in their approach or woked wrong. And given the demographics above, it was especially ironic in those cases where gay white women were shouting down and dogpiling on minority authors.

So, do I have any answers or suggestions on how to fix any of this? No, I really don’t. It could be too broken to be fixed for at least another generation. I’m generally a story first guy, but I also understand that people write what they know, different people and cultures have different approaches to storytelling, and men and women have different approaches to storytelling. Unless the market actually collapses under what it’s doing, it’s going to continue chasing dollars in the way it has been, even if the market may actually be shrinking. Big changes in any direction are painful, and where retail is, a sneeze could kill a Barnes & Noble, which is one of the last bastions of trad-pub.

Indie and self-publishing has balkanized the market, and while it has allowed for a number of niches to be carved out and succeed, they’re still niches and very little seems to have captured the Zeitgeist.

Personally, I’ve never been one to tout the “diversity” of our publication. Because a) I feel the stories stand up and that’s what matters and b) to do so would be to reduce our authors to mere demographic data rather than living, breathing people with stories to tell. At the same time, I’ve been puzzled when I’ve seen other publications lamenting that they haven’t gotten enough of this or that kind of author submitting to them, when we’ve received and published stories from just about every corner of the earth without actively seeking the kinds of diversity that some others have sought out.

Anyway, this has already gone dangerously into rambling territory, so I’ll conclude by shilling.