Recently at Black Gate, Adrian Cole spoke about some of his work and upcoming projects, including a new Dream Lords fix-up anthology, Dream Lords: Legacy!

Also coming from Pulp Hero Press will be reprints of my first novels, The Dream Lords sequence, a sword and planet trilogy that initially came out from Zebra Books in the 1970s (when they also published a terrific list of REH pastiches). There will be some new material added in to each of the three Dream Lords volumes, and ultimately a brand new volume, Dream Lords: Legacy, which will bring together the new stories I’ve been having published recently in Cirsova Magazine and the revived Startling Stories, together with new material exclusive to the book.

Adrian Cole’s new Dream Lords stories were originally published in Cirsova Vol 1. [2, 5, 6, and 7]; Return of the Dark Brotherhood, will appear in the Spring 2020 issue of Cirsova. 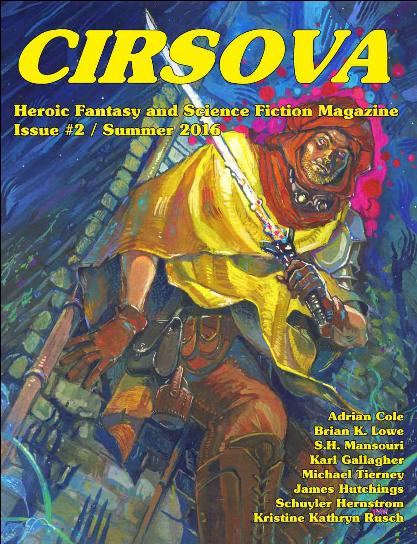 Yeah, buddy!  Jabari Weathers has once again outdone himself with this cover piece for Adrian Cole’s The Sealed City.

Jabari’s great to work with and seems to be making a habit of delivering top-notch art on and ahead of schedule.  He’s absolutely someone you should consider hiring for your projects!

We’ll be launching the Kickstarter next week to take pre-orders and fill ad space.

Our pre-Kickstarter ad rates will be good until then, so if you want a discount, hit us up about it soon!

First, I think it is important to point out that Submissions are still open and we will be reviewing stories to be purchased for inclusion in issues 3 & 4 through May 1st.  Why May 1st?  Because I plan on relaxing over the weekend and won’t check my inbox for last minute submissions until Monday May 2nd.

Here is the current lineup of Cirsova Issue 2 –

Images of the Goddess by Schuyler Hernstrom

We’re looking at 2017 submissions window being open from November through December, buying 4 issues of content that will take us through the year.

In the meantime, if you haven’t bought a copy of issue 1 yet, check it out!  Help us get into the black so that we’re not a flash in the pan.

Awhile back, I picked up The Dream Lords: Lord of Nightmare by Adrian Cole.  I was intrigued by the cover that proclaimed it to be “Fantasy and Horror in the Tradition of Tolkien and Lovecraft”, particularly because neither of those really jibed with the image of barbarians fighting a dinosaur dragon with a single eye-stalk.  When I found out that it was the middle book of a trilogy, I had an “Aha!” moment and put it down, at least until I got the other books.  I was a bit wary at first, as the chapter I’d read was a muddled mess to someone who hadn’t read the previous book, but starting where one was supposed to start quickly rectified any of my initial negative impressions.

Now that I’ve started it from the beginning, I’ve been enjoying the Dream Lords series tremendously. But yeah, Tolkien and Lovecraft?  I’m not really seeing it.  There’s a city named Melkor in the first book, but Dream Lords is more Gardner F. Fox, John Jakes or Jack Vance than either Tolkien or Lovecraft.

In a nutshell, a young heir to the Dream Lords, the rulers of mankind who can wield powerful suggestions and illusions through sci-magic (psy-magic), learns that not all is as it seems, and he becomes the chosen one champion of those who are under the thumb of the human elites.

Though it has a lot of the tropes and trappings of the New Wave, I actually find Galad Sarian far more likable and, well, heroic, than many of the well-known and iconic heroes of the New Wave.  Unlike Elric of Melnibone, he isn’t morally crippled by his decadent culture, and unlike Corwin of Amber, he’s not some ubermensch narcissist (though he comes from a culture that would like him to see himself as such) who sacrifices his allies by the million with no regard.  Galad sees the wrong in his people’s way of life and wants to change it; when his allies (even the faceless ones) die to advance his cause, it genuinely grieves him.  Where many 70s SFF stories feature cynical heroes in crapsack worlds, Dream Lords has an affable idealistic hero who’d like to make his crapsack world better.

This series suffered from a number of cover-related errors.  The first printing of book 2 had no indication that it was a sequel while the second printing of book 2 indicates that it’s book 3.  Also, the “Fantasy and Horror in the Tradition of Tolkien and Lovecraft” may be a bit of false advertising.  It’s a shame, too, because while it’s certainly not high fantasy or cosmic horror, it’s excellent for what it is.  To be fair, by the third book, the series is described much more accurately as “Heroic fantasy in the tradition of Robert E. Howard.”

The name-dropping of Tolkien in particular raises an eyebrow, especially in the context of the rise of “Tolkienian” fantasy just a few years later in the late 70s.  Largely thanks to Terry Brooks, one sees “Tradition of Tolkien” and thinks high fantasy LotR knock-off.  In a post-Shannanananana literary world, Tolkien-dropping comes with particular implications; I wonder what the implications would’ve been in 1975, however.  Would someone picking this up think “Ah, a story with elves and a Dark Lord and maybe some Cthululz”?  I mean, I looked at it and thought “There’s no way this is what it says it is, but I’m curious anyway”, but was it actually saying something different back then?

Rather than needlessly speculate, I thought “Why not ask Adrian Cole himself?”  Here is what Cole had to say about the covers of his debut trilogy:

Firstly, I never had any say at all on the Zebra paperback covers. Originally volumes 1 and 2 were put out with pretty awful covers. A Plague of Nightmares was taken from a movie poster, I think. Lord of Nightmares was done by sf cover artist, Jack Gaughan, who had done a lot of good stuff, but the one he did for Lord was really poor, or so I thought. I think Zebra must have capitulated, because they reprinted the 2 books with covers by Tom Barber – Plague was a beautiful wraparound depicting the four horsemen (see my website at adriancscole.com) and Lord was a bit Frazetta/Jeff Jones in style. The third volume, Bane of Nightmares, was issued at the same time as the reprints and also had a Tom Barber cover, and it was very much a Frazetta clone, but very nice.

As for the cover blurbs, well, they’re just as interesting! When I wrote the books (started them at least 5 years before they got published) I had not read any REH, Fox, Jakes or Vance at all. Those great pleasures were to come. The books that influenced the series were: ERB, DUNE (Herbert), LOTR and Dennis Wheatley’s black magic books.

By the time the 3rd volume came out, Zebra were doing very well with their own line of REH books (including several follow-ons by Offutt, Wagner, Smith etc) so they put mine on the REH bandwagon, too.

I was surprised to see the original cover blurb “in the tradition of LOTR and HPL” but I suppose there are bits in the books somewhere. (I was a big HPL fan from years before.) What did amuse me (as I pointed out at a Fantasycon in the UK at the time) was that one of the newer covers said “Adrian Cole’s great adventure”, which made it sound autobiographical!

In 1975 the Tolkien revival was well under way (as was the ERB revival) and the REH one was just about getting going – so I think that’s why they moved over to the REH blurb with the reprints.

You may also notice that they got the volume no. wrong on volume 2 (the reprint) and put volume 3! Couldn’t have helped sales.

I have to admit, I did read the first SHANNARA book and thought it was an appalling rip-off of Tolkien. I was amazed that the author got away with it. Ironically, last night, here in England, we had the first tv episode of the Shannara Chronicles. I watched out of curiosity. Low grade stuff – won’t be watching any more!

For one thing, this is more anecdotal confirmation that many Sci-fi writers had little to no control over their covers.  I suspect that Zebra included the bit about Tolkien and Lovecraft to capitalize on the booms in popularity both authors were enjoying.  Ultimately, I think this did The Dream Lords a disservice, though perhaps not so much as omitting then misprinting the volume number on Lord of Nightmares.

I do find it interesting that while I’d compared Dream Lords in my mind to Fox or Jakes, Cole hadn’t yet read those himself; what that says to me is that the Burroughsian branch of SFF produces similar leaves such that even outside the influence of other writers in the tradition of Burroughs there is a sense of unity and both stylistic and thematic harmony among his acolytes.  While I’m a fan of both Tolkien and Lovecraft, their styles don’t lend themselves well to imitation, but Burroughs… Man, Burroughs!

Also this addresses in part why Galad is much more likable than many New Wave fantasy heroes; while heroes from the New Wave were deconstructing established tropes of heroic fantasy, Galad feels very much like an homage to the ‘good guy’ heroes of pulp fantasy that writers like Moorcock and Zelazny sought to undermine.  I can certainly see the influence that Dune would’ve had on the setting and culture, particularly the characterizations of the Dream Lords and the villains, as well as the Wheatley for the occult symbolism in places, but it really is the Burroughsian heroic archetype and the themes which accompany it that dominate what I’ve read.

More recently, Cole actually HAS been writing some Lovecraftian tales in his award winning Nick Nightmare series.  Misha Burnette’s upcoming novelette A Hill of Stars in Cirsova Issue #1 has led me to rethink my embargo on contemporary Lovecraft tales, so I might stick Nick on my reading list.  In the meantime, I’ll be keeping an eye out for more of Cole’s Sword & Sorcery stuff.