Remember how I said that if Tom King started Batman 40 with a pull-back from the kiss, with Bruce saying “No” and Diana saying “Good” it would be brilliant and cathartic and illustrate that he understood both of the characters and all of that stuff?

Well, Tom pulled it off, doing it almost exactly like I said he should. 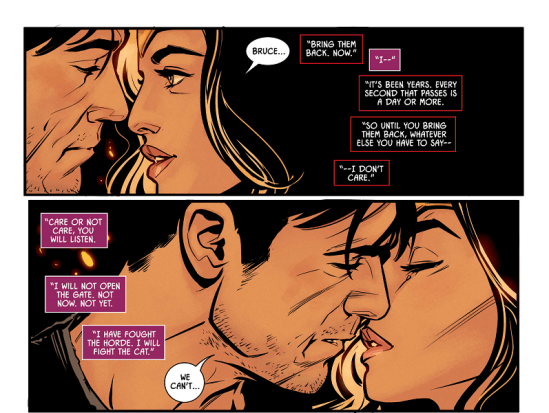 (Black and Purple are Catwoman and the Gentle Man; the former is pissed because the Gentle Man never told Bats & Wondy how the passage of time worked there) 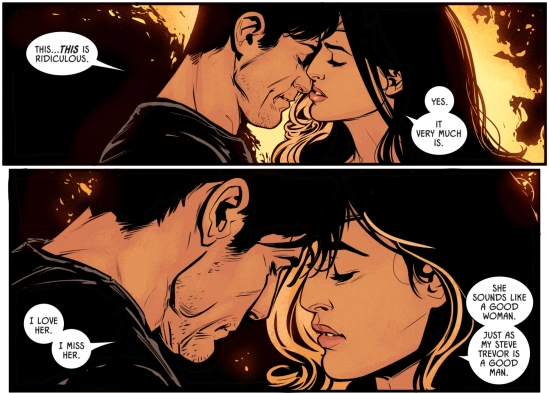 Wondy tells him to “be good”. 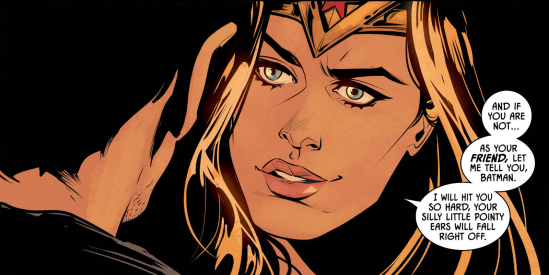 No, I’m not saying that Tom did what I suggested, merely that it was the obvious choice and the right choice and the choice that would relieve three weeks of nail-biting tension.

Tom King’s Batman is someone who could spend 40 years alone fighting demons with one of the most beautiful women on earth but stay true to the woman he made his promise to. It’s a good Batman.

For those of you not following DC comics, Batman recently proposed to Catwoman: Bat & Cat are engaged. Tom King’s run has been solid thus far, and parts one and two of his “Superfriends” mini-arc did well to capture the characters of both Batman and Superman and show why they are so beloved, having stripped away the dark layers of edgelord some writers put on them and showing why the two are friends: they are both men who try to do the right thing in spite of (or because of) the adversity they’ve faced, and they have a tremendous amount of respect for one another. Respect AND humility, because each feels deep down that the other is truly the better man.

There’s trouble in paradise, however, and fandom is prepared to be outraged by Batman and Tom King’s betrayal: 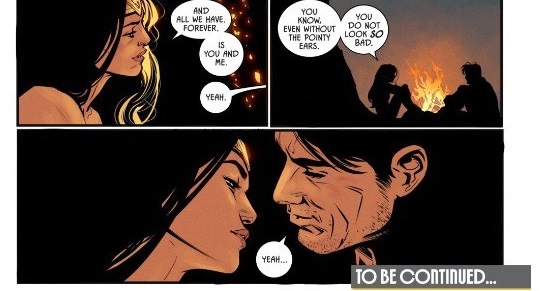 (Note that much of this issue is a call-back to a JLA from about 15 years ago, with Bats & Wondy’s “first kiss“)

Part 3 of “Superfriends” in Batman 39 shows the power of the cliffhanger. And the danger.

Wonder Woman and Batman have been called to spell the eternal battle of The Gentle Man. The Gentle Man is constantly fighting hordes of demons for aeons, and once Bats & Wondy promised to fill in and take his place if he ever needed a break. Well, GM needs it, and Bats & Wondy don’t go back on promises (brilliant foreshadowing, if King doesn’t drop the ball!). Unfortunately, time passes incredibly slow there, so GM’s quick vacation on Earth will be ten years for Bats & Wondy.

#39 ends with a tease that Bats & Wondy might kiss! Bats may cheat on Cat! Needless to say, there’s been a good amount of furor over this. However, there have been certain hints dropped in #39: Cat’s belief that Batman is a “Good Man”; The Gentle Man’s own devotion to his wife—he hasn’t seen her for one year in earth time, but a thousand years to him, yet he still loves her; Wonder Woman does have an intimate connection with Bats, but the Temptress role is out of character.

At the end of Thomas Burnett Swann’s The Dolphin and the Deep, the witch Circe offers the hero a choice: he may have her but abandon his friends forever, or he may keep his friends and lose her. He chooses his friends—‘Good’ Circe tells him. ‘If you had chosen me, I would have killed you.’ As his reward for choosing correctly, the hero is rewarded with true love when Circe grants the dolphin its wish to become a real girl.

I can see something similar happening in Batman #40.

If it does, Tom King will have pulled off a brilliant fake-out with his cliff hanger. If Bats stays true to Cats, he’ll be able to say to the worriers “Come on, guys, it’s BATMAN! He’s a GOOD GUY!” It will have been a nail-biting two weeks for reader, and the catharsis will be fantastic.

If Tom King drops the ball and Bats cheats on Cats with Wondy, not only will readers be disappointed at the betrayal of a fictitious character’s trust and, more importantly, the betrayal of Bats & Wondy’s core characters by a writer, he will have missed out on the chance for that brilliant cathartic moment when, after three weeks suspense, Batman says “No” and Wonder Woman says “Good, that’s what you were supposed to say”.

So, what am I getting at here? Cliff-hangers are an INCREDIBLY powerful tool in a writer’s arsenal. But the payoff of the conclusion has to meet reader’s expectations of the character. Make the “will he/won’t he?” question believable enough to cause genuine suspense (and it’s working here, Tom!), where it brings doubt into the reader’s mind, but fulfill your reader’s expectations for the characters. Tarzan doesn’t get trampled by the aurochs, John Carter doesn’t get run through by a Thark, and Batman doesn’t cheat on Catwoman with Wonder Woman. The conclusion of your cliff-hanger is what will lead readers to judge whether the cliff-hanger itself was brilliant or hackneyed.