Something that didn’t quite register until after yesterday’s post: Fafhrd & Gray Mouser underwent a reboot. This is not the sort of reboot that most people think of today with movies, where a property undergoes a remake and, if it’s a success, it becomes ongoing. Think more of like when Futurama got a reboot via a season of direct to video movies after its cancellation.

Fafhrd & the Gray Mouser was a pulp property whose creator gave it a grim-dark (grimmer-darker?) reboot following the release of the anthology “Two Sought Adventure”.

When people are “reading it in order”, they’re reading prequels first. It’s starting with Phantom Menace.

After other anthologies were released in the late 60s, Two Sought Adventure (1957), which anthologized all but one of the duo’s pulp-era adventures, was rebranded and re-released as “[Volume 2:] Swords Against Death” with additional stories and continuity material, making it something of a “Special Edition Re-release”. Never mind that it was re-released a couple years after what retroactively became volumes 3 through 5.

That’s right, the publication order of Fafhrd & Gray Mouser books is pseudo-II, III, IV, V, with I and II published around the same time, then VI and VII several years later.

The first Fafhrd & Gray Mouser stuff I read was Swords Against Death, which is pretty consistent, though the later stories do stick out like sore thumbs a bit. Yet I heard a lot of gripes from people starting with Swords and Deviltry. So I recommended folks check out the earlier stuff in volume 2 first. But now, reading some of the later stuff myself, I can definitely see where the gripes come from, especially from people who go into it looking for pulpy sword and sorcery adventure.

There were six years between the last pulp-era Fafhrd & the Gray Mouser story and Lean Times in Lankhmar. There had been some lapses earlier (5 between The Sunken Land and Adept’s Gambit and 4 between Adept’s Gambit and Claws from the Night). The first several stories, however, were one after another from 1939 through 1943; and as I’ve noted in my reviews of pulps at Castalia House, a major tonal shift in SFF started taking place in the early 50s. The shift is even more dramatic in the 60s and 70s, the period during which the vast bulk of the Fafhrd & the Gray Mouser canon was written.

I’m not saying “Don’t read the later Fafhrd & the Gray Mouser stories”– not at all. But I am saying I may be closing in WHY those stories feel so different and readers who’ve seen my praise for the pulpy goodness of Swords Against Death feel confused and let down when they jump into the franchise elsewhere.

While the duo have their origins in the pulps, the majority of Fafhrd & the Gray Mouser stories come from the much later New Wave of science fiction and the Sword & Sorcery Renaissance which was in many ways a grotesque of the genre which had birthed those characters.

So, when I’m recommending that people should read Swords Against Death first, “even though it’s the second volume”, think of me like the guy saying “If you want to get into Star Wars, maybe you should watch A New Hope first, even if it is the Special Edition* and the box says Episode IV.”

*:Except really, Bazaar of the Bizarre is a lot better than CGI Jabba the Hutt

I’m still enjoying the Fafhrd & Gray Mouser stories, but I think the “fix-up” nature of the volumes may be to their detriment.

I’m thinking I’d much rather read these as individual stories, each on their own and by their own merits, rather than shoe-horned into a continuity.

Unlike Howard’s Conan Stories which were hammered and shaped into some sort of continuity by those who anthologized them, Leiber was writing the novelizations and fix-ups with a mind for his continuity and doing his best to arc-weld stories that were sometimes written out of order into a continuous arc. And I think that the stories may suffer by it.

For one thing, it gives the impression of Fritz Leiber as being like the asshole DM who is always angling for a TPK and then, when he doesn’t get it, he has an NPC steal all of the players’ loot without even bothering to roll for it. Honestly, I prefer the “characters frittered away their wealth between stories” approach to “the spoils of the last adventure were promptly stolen” that Leiber uses. In Swords Against Wizardry, a short bridging story is used to explain why they would go on the Quarmall adventure right after their big Stardock score. Well, because they got conned and lost everything. On its own Two Best Thieves in Lankhmar isn’t bad, but it’s annoying because I feel as cheated as Fafhrd and Mouser – the grueling Stardock  adventure suddenly becomes for nothing (aside from a quick lay from a couple of weird invisible ladies).

I don’t really need to know why Fafhrd and Mouser go on their next adventure. Like I said, it’s easy enough to assume that they squander their wealth on drink and dumb largess without having to go into an explanation of how they kept losing their money after each heist.

At least in Quarmall it appears there may finally be some Wizards for our duo the bare their Swords Against (Swords Against Mountains just doesn’t pack the same punch, and I’m sure that even by 1960s standards Swords Against Lesbians might have been deemed less than appropriate).

While there were a couple really good 60s stories in Swords Against Death, I think that the few from the 40s were my favorites. They were great short adventures and each stood nicely on its own. Honestly, the weakest parts (despite the excellent writing) of Swords Against Death (itself a repackaging of the much earlier “Two Sought Adventure”, tweaked for continuity shoe-horning) were the bridging pieces that fit those earliest adventures into the canonical continuity that Leiber had been welding together in the 60s.

I’ve been reading Fritz Leiber’s Stardock, a Fafhrd & Gray Mouser story that mostly involves climbing up a big-ass mountain, and it’s got me thinking…

A lot of adventure fiction involves far more to it than easily modeled practical puzzles and combat; getting from point A to point B and traversing the obstacles in between makes up a good chunk of it. Unfortunately, it’s one of the hardest to model in game.

Fafhrd & the Gray Mouser don’t have near the trouble fighting bandits, thieves, and evil priests, pilfering ruined castles and temples, or escaping from the clutches of evil wizards as they do spending several days climbing up an almost sheer granite cliff-face, carving out foot and hand-holds with an ax, using grapnels, pikes, and pitons to climb around lips and overhanging boulders, and trying not to starve or die of exposure. Even without the ethereal fire princesses haunting them, mountain goats stampeding at them, invisible manta-ray riders hounding them, furry dragons harrying them, rival adventurers taking the occasional pot-shot at them, the duo have their work cut out for them just getting to the top.

The problem is, if you’re wanting to model an adventure after any of those “man against the elements” type stories, you’ll have your work cut out for you too. Overland travel is often one of the most hand-waved elements of Dungeons & Dragons; it’s hard to make it gameable. Rules exist for getting lost, determining weather and possibly even contracting disease, but getting lost screws up mapping (something DMs are loathe to do to their players, as mapping is challenging enough as it is sometimes), weather is window-dressing, and saving throws to not get sick aren’t much fun (and they’re a passive mechanic).

Outdoor Survival offers some excellent mechanics to mini-game overland travel, and it’s obvious why it would be used as core component of the original D&D system, but it offers little for the sort of adventure that involves a lot of climbing.

Thieves in D&D have some pretty impressive cooked in mechanics for scaling sheer surfaces that may be as much from Fafhrd & Mouser as they are from Jack of Shadows; if a thief can only use their thief skills with thief tools, could those thief tools include climbing instruments? Fafhrd & Mouser have some impressive gadgets they use which, while they don’t make the climb ‘easier’, make the climb at least possible.

So, you want to have an adventure with treasure on top of a mountain that players will have to climb, you want the challenge of climbing the mountain to be a significant part of the adventure, and you don’t want the climb to be just a series of rolls and skill checks.

This will probably take a lot of planning, because to make the climb gameable, you’ll have create unique challenges for the climb, and some of them probably WILL inevitably involve skill or stat checks.

You’ll want to do some research on equipment and specify what the players will have available to them, and possibly give them instruction on how to use it; if they know what it’s for, they’ll have a better shot at solving puzzles with them.

For instances where you DO need to rely on skill checks, have the result lead to a new situation that can be dealt with via problem solving; a gust of wind or a slipped hold might not result in the whole party falling off the mountain right away, but someone might come loose and need to be pulled up by others, or if someone ends up suspended free, they’ll have to figure out how to swing back to the cliff face and get hold.

Because it’s D&D, you’re probably going to want to break up the climbing with encounters; or even throw in some encounters during the climb. Having to fight off some bird or while clinging to a rock-face could create some unique challenges for players. But it’s likely to be lethal. This is the sort of adventure that has TPK written all over it; wrong moves mean death, characters can only carry with them the absolute essentials, and there’s no reward for making it part-way, so be sure that whatever you put on top of that mountain is damn well worth it. 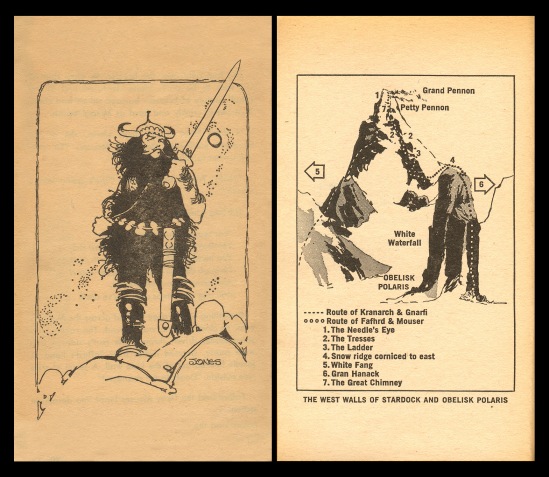