I absolve you, you deep fried queen of the south.  May the set of knives with your name on the blades in my kitchen remain forever sharp. 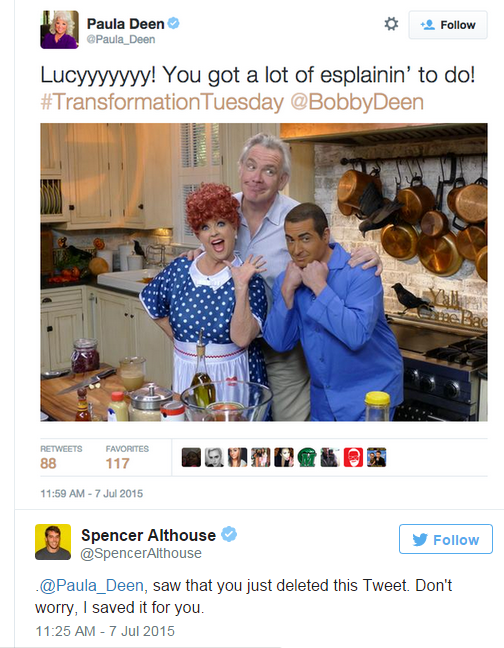 Hell, she fired the person who posted this and pulled it immediately. For the people who were all “if it wasn’t racist, why’d she delete it?”, she deleted because of people like this guy and everyone else who is all “Saved for evidence of racism!”

Besides, isn’t this just white-face?  You see, Desi Arnaz and many Cubans, myself included, are basically just white guys who tan really well.  Now that White-Hispanics are a thing, liberal white people have made it so that we’re not even allowed to be “People of Color” anymore.  Probably because a lot of Cubans have an anti-communist bent for understandable reasons.

This did get me thinking about food, though.  There’s a decent overlap between southern down home cooking and Cuban cuisine.  My mom, who grew up in the north, remembers how people thought she and her family were weird and crazy with their red beans, rice, fried porkchops & vinegar and whatnot; down in the south, though, no one bats an eye at red beans & rice.  Fried anything is good.  Food transcends race and could be bringing everyone together if people stopped saying that eating other cultures’ food is racist.  Down here in the south, we’ll eat anything.

Speaking of the South, if the South rises again, it certainly won’t be the next few turns of Civil War.  After all of the chaotic scurrying in the Trans-Mississippi in the first two turns, my endeavors there amounted to little more than a temporary distraction.  I overallocated my command resources there while I didn’t have the manpower or generals to take advantage of it.  Meanwhile, though Johnston and Jeb Stuart were able to split Kentucky down the middle, them union boys were able to get into Nashville by boat from Cairo.  Fort Donelson & Fort Henry were both burned to the ground, and an out-of-supply Army of the Tennessee had to fight their way back over rivers toward the capital, surrendering Kentucky to the damn Yankees.  That’s not the worst of it, though. That bastard Foot sailed down the coast of Virginie and into North Carolina and seized several ports.  The Army of Northern Virginia’s far too busy keeping McDowell in check and on his side of the Mason Dixie to pull back and do anything about it, and even if they could, it would leave the road to Richmond wide open.  I don’t know that I’ll ever get enough guys to do anything about them, because the Rebs have garbage railroads.  I’ll need at least a two star general to march off and do something about those ports.  At least my Texas rangers ran off those damn Injuns!

I’m not worried about losing or doing poorly, though.  My dad needs to break his losing streak.  The best part is, I can honestly say I’m not going easy on him.  Taking both the Tennessee heartland and the Carolina coastline was a master stroke.  The idea of Stonewall Jackson burning down supply depots all over Kansas and Missouri may have been neat and exciting, but it was ultimately derping around when I should’ve been focusing on keeping the rivers open.

*: If you’re Cuban and are actually upset by this, fine, whatever, but white tumblrites and twitter hipsters getting offended on our behalf can sod off.

that if you think that an all you can eat Taco Night to raise money for charity is racist, you probably need to kill yourself right now at this very moment.  Do it.  More Tacos for the rest of us who actually appreciate the combination of mildly exotic food and charity.

If the modern day has shown us anything, attempting to celebrate and enjoy other cultures is so dangerous, you should probably just ban anything in America that you can’t get from the Dixie Cafe, so as not to offend anyone.  In fact, if you’re white, the next time you see someone who isn’t white eating a hamburger, you probably ought to slap it out of his hand and chide him for appropriating your culture.

It’s like non-whites can’t stand the fact that whites realize that their food is kind of boring and that eating the food of other cultures is like a big exciting thing for them that makes them want to celebrate!  It’s like “Grrr!  I’m angry that those white people have found out that there is more exciting food than a piece of meat ground and put on top of a potato or something and now they want to dance!”

Welcome to the Food & Fantasy Blog Carnival! For the next two weeks (Jan 8th – Jan 21st), Cirsova invites you to share your stories about food and gaming. What? Cheetos and Mountain Dew? No! That’s not what we’re talking about! We’re here to explore the exotic cuisines of your fantasy worlds and the opportunities to bring them out of the game world and into reality, adding a unique touch to your game.

One of the things that makes fantasy games appealing is the diversity of peoples and cultures that inhabit the fantasy world. These worlds can be just as diverse or even moreso than our own world. And in our own real world, one of the most common ways to experience a different culture is through its cuisine! Most Americans have never been to Mexico, China, Japan, Italy, etc., but most have eaten Mexican, Chinese, Japanese, Italian food or some synthesized American facsimilie thereof. Similarly, gamers have never been to kingdoms of dwarves, elves, orcs or halflings, but perhaps they can experience it through their cuisine or some synthesized gaming-table facsimilie thereof.

The food of a culture will reflect a lot about their tastes, the sort of livestock and produce they have access to, cooking technology, as well as any cultural or religious mores they may have about foods and eating. Perhaps a group of dwarves might have some equivalent to kosher or halaal dietary requirements?

In a game that a friend of mine ran, one of the towns had a signature snack that was served in all of the inns and taverns. The snack was a toasted bagel with pico de gayo and smothered with melted cheese (one party member was playing a Rabbi cleric so the spreads were a kosher snack). The session after these were first introduced, the DM brought the fixings, baked them up and let everyone have the real thing! It wasn’t fancy, and upon reflection was basically a variant on a bagel pizza, but it was something that was brought out of the game world into reality in a very tangible (and tasty!) way.

In Cirsova, the Marshfolk of Illi have a stew called “Gullodana”, which is a huge pot of slow-cooked fish and fowl and other things. Something like that might present an opportunity to toss some things into a crockpot, hope for the best, and serve to the players. If it’s weird and not particularly great? It’s a cultural thing, an acquired taste. “Man those Marshfolk eat gross stew!”

There are lots of things you can do! Do your players like to drink alcoholic beverages? Make homebrews that are world specific! Do dwarves like dark stout ales and elves like hoppy lagers? You can find handy guides online on how to make mead for your vikings.

For this carnival, share your stories about how food was worked into your games, ideas for developing fictitious cultures through their cuisine, any anything else food and gaming related you can think of (even if it is Cheetos & Mountain Dew)!