I know for a fact that a lot of really cool book bloggers follow us on WordPress. There are probably a lot of other regular readers off-platform.

If you would like to receive free digital copies of Cirsova, leave a comment on this post with a link to your blog!  We’ll send a PDF to the email address associated with the account you commented with.

Let us know when you have a review up and we will link to you.

Out of 0ver 100 posts in April, Black Gate’s review of Cirsova #1 was their 13th most popular.  We’re worth talking about!  Just sayin’.

I want to see a highly insensitive turn-based economic-military strategy game based on The Dragon Masters.

Vance provides us with a handy value conversion via an exchange between one of the villains and a Jabba the Hutt-like* character upon which we can base the military economy of Happy Valley: 25 choice children are worth 3 dragons. It’s a little wobbly, as the trader doesn’t seem to take the evil lord of Happy Valley up on the offer, but it’s enough to give us an idea of how resources and commodities might work on Aerlith.

You’d need warrens & tunnels to crowd your people in, farms to feed your people and your dragons, breeders and trainers to fill your dragon army ranks and make them effective, and a surplus of women and children to trade for additional dragons and sundry magic items. Or something.

Speaking of dragons, I’m one big dragon-fight and a conclusion away from finishing the first draft of the short story I’ve been working on.

As for my other stuff, having the Cirsova book up on DriveThru was a bust, so I’ve gone back to Amazon exclusivity. At least there I could give my stuff away for free and it would get some downloads.

*The one from the original script and comics, not the slug muppet from the 3rd movie.

This is the last call for anyone who wants a free copy of City at the Top of the World!  Leave a comment here or on the stickied post.  Your comment must be associated with a valid email.  A “Like” doesn’t count, because there is no email address associated with the Like.  Comment by no later than Sunday (or the wee hours of monday morning).  I’ll be sending the free copies out Monday.

Leave a comment, and I will email you the pdf version of City at the Top of the World.  Please make sure that the account you leave your comment with has a valid email address associated with it so I can send you a copy of the book!  Please note, a “Like” will not provide me a link to your email address; it must be a comment.

This offer is valid until December 21st; you will receive your copy on December 22nd. 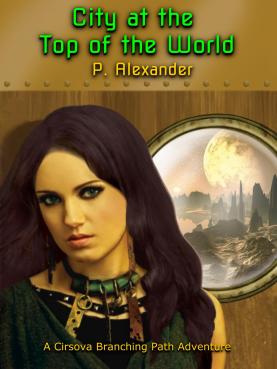 Tomorrow is the last day to download your Amazon Kindle copy of City at the Top of the World for free.  Over 50 copies have been given away so far.  It’s peaked at #48 in free Sci-if/Fantasy short reads.

If you’ve downloaded it and liked it, review it! Gimme a star(or five. Preferably 5)!

Or, if you really liked it, you could buy a nice dead-tree-pulp version from Lulu

. The promo code should still be good for 15% off your entire lulu order, so grab some other swag while you’re there: FWD15