One of the key features of G3 has been how the difficulty scales and play remains relatively balanced despite discrepancies between PCs’ levels of experience. While it is theoretically possible for a character’s combat potential to top out after 8 sessions or so, the overall fragility of characters in the system has kept things balanced and potentially lethal most of the time. With my latest character, we’re beginning to see a few potential strains on the system, though I think they can be easily addressed.

My current PC is the first true “tank” in the party. We’ve had a few fighter characters before and characters with high (for the system) HP, but my Man-At-Arms is the first time anyone has really tried to make the most of the armor system.

G3 does not use the same sort of passive defenses as D&D. Characters have a raw attack value that is never modified except by disadvantage or advantage. The point of Armor in G3 is damage reduction. Each point of armor reduces the blow by one, though all attacks (except by smaller creatures) do ping damage. So 4 points damage would be reduced by 4 points of armor to 1. The difference between that and 5 points of damage is that the one damage is seen as having penetrated the armor. In the former case, the one damage is representative of the fatigue/being winded/whatever, while the latter, the thing has actually hit you and probably broken skin or bruised you. It’s in the latter case where effects like poison, rot, or corruption would become an issue. (I.E. 4 damage against 4 armor, the ghoul knocks you back and you take your ping, 5 damage against 4 armor, the ghoul has scratched you and you roll for paralysis, even though you’ve lost the same HP).

With 11 HP and 4 armor on all body parts, my Man-At-Arms can take a lot of hits from just about anything before he’s in real trouble. That’s a huge change from when everyone in the party had 1 armor at most and died in 2 hits.

Overall, I think this has caused less strain on the system than people are expecting, because it’s only one character who’s able to tank like that, and we’re still fighting some things that don’t go down easy and can still hurt us really bad. A couple weeks back, we fought a Moth Knight, who must have had ridiculously high armor, because I put nearly 30 damage on him before he died. Plus, he would’ve killed me if he got more than one hit on me. (The rest of the party had ineptly tried and failed to stop me from killing the monster because I was the only person at the table convinced that it was not going to talk with us once it drew its sword; if they had stopped me from killing it and that wasn’t enough to satisfy it, it absolutely could’ve TPKed us, especially if one of its friends showed up).

Last night, we handled an old task of torching a hornets’ nest. On the way, we kicked the crap out of a werewolf, and the hornets’ nest was something of a pushover, and it got me thinking some about the way the system is balanced and how other GMs can keep their games from going out of whack.

While the werewolf seemed like a pushover, it should be noted that there were a lot of us and one of him; a lot of us are big damage dealers now, even if we are glass cannons in many cases. If my character didn’t end up with silver brass knuckles as a trophy for winning a tournament in the fighting pit against the #1 Seed, a Grizzly Bear, the werewolf may have recovered. Even so, I may have been turned into a werewolf – gonna have to find that out next session.

So, what happens when characters are getting too powerful – too likely to be able to hit for double damage and have armor to soak up most normal sized hits?

-More enemies. As a general rule, economy of action in RPGs means that more weak enemies are a bigger threat than fewer strong enemies. Our last really dire fight where someone died and someone else got maimed was a mass combat and involved a wizard trying to spell snipe getting arrowed.

-Ranged weapons are a major equalizer. A lot of fights where we’ve taken big hits have been ones where enemies had crossbows (which ignore some armor) and got a few shots in before we could close the distance. This allowed them to neutralize characters who could survive one hit but sure as hell weren’t willing to take another, so dived for cover.

-Enemies can make attacks for big damage, too. Attacking at disadvantage for extra damage is a way that characters with high attack stats can regularly do much bigger damage, and it’s this damage that can go way above and beyond normal armor soak. Against enemies with chain or better, the average attack from a weapon that does not ignore armor will ping for one; the average attack for extra damage will hit two over even the best armor. The armor will protect a character from a killing blow in almost all cases, but getting knocked down by half your HP in a single hit while wearing decent armor will really make you question how long you can go toe to toe with something.

-Enemies with Armor can make things a bit of a challenge; even two points of armor will keep most mooks from being cloven in twain by a single hit.

-One thing we’ve started to come up against has been enemies with damage immunity. We fought a lot of demons who just shrugged off our attacks; they had to be destroyed using environmental elements. This also gave us a chance to play with some of the combat tools that are not damage oriented.

Another issue we’ve come up with is that, after a certain point, damn near anything rolled is a hit. Advantage and Disadvantage add a bit of granularity on a situational basis, but sometimes you need a little bit more, so we’ve experimented some with doubling up on disadvantages. For instance, when the archers on the streets below were firing at the sorcerer in the window, who was trying to cast planar bolt in a dark room, the archers rolled at double disadvantage – one for the cover, another for the obscured target in the dark. Most missed, a few hit and killed the sorcerer.

Since you can trade advantage for various results, such as extra damage, called shots, disarming/disabling an opponent or somesuch, you really ought not come across many/any situations with multiple advantages on an attack roll, but additional disadvantages can be given to keep things from being too much of a gimme.

Anyway, we’re still testing and tweaking, and seeing what will and will not break the game. Getting a huge influx of loot didn’t quite blow things up like we thought it would, though most of that loot came in the form of weapons and armor. Taking a few decent swords and helmets to dole out among the party members kept the liquidity down. We’ll still have to see what happens if the party ever gets a giant cash haul.

One final thing we realized last session was, since the standard of living rules were implemented, all of the nobles in the city will probably be slightly tougher than us in a fight on account of being better rested. No normal professions offer enough daily income to get players into a bonus HP per day range, but a rich noble who can afford lavish living and wears full plate could theoretically take a couple more really big hits than the average joe. We’ve only fought one guy who that may have been an issue for, and he got ridden down by lancers in the street, so we never found out ourselves just how much that would’ve altered combat.

I can’t say when G3 will see public playtesting, since it’s not my game, but I’ll keep folks aware of any significant developments regarding it.

Combat involves a LOT of dice rolling. Like Yahtzee or Farkle, so it might be fun, and I don’t really see any reason to change it.  Just roll a fist full of six-siders, pick out any kills and knock down some minis/scratch off your unit HP.

Morale rules are less fun and may be fairly incompatible with standard monster morale ratings from basic games. 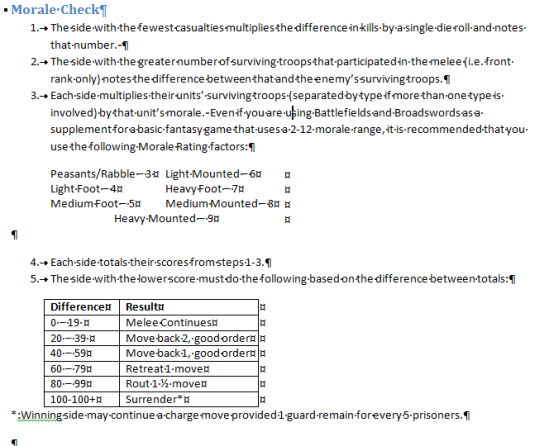 I feel like a failure as a technical writer because I haven’t figured out how to better explain and simplify the morale rules yet. I want to at least include a faithful recreation of the base mechanics of Chainmail, even if I intend to leave out the historical flavoring optional rules, like ‘Swiss just murder everyone’ and ‘all Polish troops are elite’.  But Morale and Cannon fire are doozies.

Anyway, to accommodate using morale from basic games for the S3M, I’ll probably need to make some major changes in how retreat and end of melee works.

I’m almost done with the core mechanics, but I find myself doubting the usefulness of B&B as a product.  I’m hoping that the S3M & Unit Cost Guide will justify and validate its existence in the OSR.  Unlike HALLS, though, I intend to see this through, because if S3M works it will actually be a functional cross-system module/mini-game that any group can use for platoon to company level fantasy combat.