Awhile back, I came up with some rules for adapting Ogre for mobile suit battles.

Well, Schuyler Hernstrom has made some custom print & play counters for those who’d like to try it out! 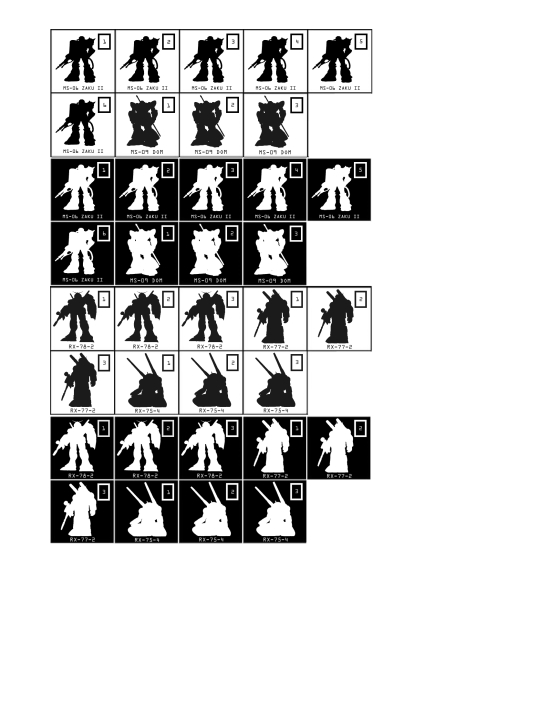 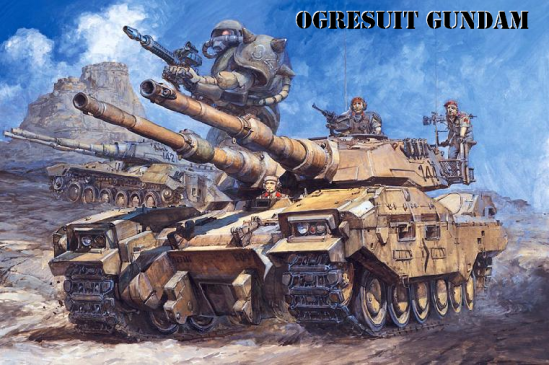 Mobile Suit Gundam for a One Year War Gamer.

I’ve actually found someone interested in playtesting this. Later this month or next (depending on how the posting schedule pans out; more on this later), I’ll have some basic rules ups with everything needed to mess around with some mobile suit battles. It will include stats for Zakus, Doms, Gundams, Guncannons, Guntanks and rules for MS vs MS and MS vs non-MS combat resolution.  If things work out in playtesting, I’ll be expanding the number of mobile suits I will be writing stats for (adding Goufs, GMs, Groundtype Gundams, and Gelgoogs), and also try to include some rules for handling landships (for those wanting to recreate the battle between Ramba Ral and the White Base, maybe even including some scenario recommendations), basically making Ogre a 3 rather than 2 tiered game.

Space ships may be more of an issue, because for some weird reason (probably related to pressure or something) space battleships in the Gundam universe are WAY more fragile than landships.  But still, I’m stoked that one person interested in this project has said they have a copy of Holy War to try out space battles with.

I probably won’t write up a formal ruleset for the conversion, but will certainly have enough written up that players can adapt it as they see fit, eventually compiling my notes into a single post or document.  I know I’m kinda half-assed on my game design follow through (I’m going to finish Broadswords & Battlefields one day!), but something playable is already written up and you WILL see it soon!

I’m about 2000 words into a post in which I expand on my ideas for Ogre-Suit Gundam.  It includes sample stats for 2 Zeon and 3 Federation Mobile Suits as well as a few suggestions on how to adapt Ogre’s engine to accommodate battles with giant robots.  Now, I need to finish the second half in which I propose how the SPI engine could be adapted for operations level war gaming.

As such, my Fortress Europa post is being bumped to next week.

Before, Vox Day’s opponents were spending a lot of effort to convince me that Vox Day was evil genius mastermind.  Today, Vox Day confirms they were right.

Later this week, I’ll be sharing my thoughts on the Fan Writers Category (expect some shilling), posting a partial review of the BFRPG module Zombraire’s Estate (Shadow Over Alfheim), and more Short Reviews.

I don’t know if I’ll really review Red Dragon Inn, but I will go ahead and say “I love this game, I want it and I want all of the decks and I wish it wouldn’t cost me close to $200 to get all of the decks.”

It’ll be a little while longer before I can continue my Bar-Lev series; I got my dad Ogre as an early birthday present, and we played it 4 times, leaving no time to set up another round of Bar-Lev.  He said it was the coolest new board game he’d played in years.  Considering his tastes in board games, that’s saying something.  The only thing that’s a surprise to me was that he’d somehow missed it in the first place.

Somehow I’ve managed to go for 30 years without having played OGRE*. Tuesday night I got the chance. One of the older guys in my gaming group who is a huge fan micros had the pocket edition and had been dying to try it out, so we gave it a go.

OGRE is basically like the crazy games my dad & I play, but it takes 20 minutes instead of several days.

I have ordered two copies, one for myself and one for my dad for his birthday.

But it came as a great coincidence that I played this game for the first time after pondering what would be a good system to have a turn-based hexmap tactical wargame based on Mobile Suit Gundam.** The SPI engine (Middle Earth & Great Medieval Battles) is easy to steal and write games for, but I don’t think that it would scale well; the difference in strength between a detachment of infantry or a T-61 and a Zaku is just too great for the system to handle. I love the combat system in Bar-Lev, but it runs on straight comparisons of combatants’ strength with no middle ground for damaged or disorganized units.

The combination, however, of straight up combat value units and modular combat values of a singular unit (the OGRE) works PERFECT for a OYW adaptation.

While in a pitched battle between mobile suits, it would probably play a lot like something like Battletech, I suppose, but because the One Year War was fought with mixed unit types (mobile suits, artillery, infantry, tanks, air planes), to easily account for those non MS units the OGRE system is great.

The standard scenario of OGRE is actually an excellent parallel to the encounter which the Gundam had with a small mining base as part of the Odessa offensive; the Zeon ground forces had to scramble their non-Mobile Suit defenses to try to stop a single MS from destroying the facility, just as in OGRE the defending player’s infantry, tanks and artillery must prevent a single super tank from destroying the command post.

The most time consuming part of this project would likely be speccing out the various mobile suits in the OGRE system. I’ll probably rely on MAHQ for some stuff (I used to know OYW MS like the back of my hand, but that was years ago) to refresh in my mind some of the weapons capabilities, ammo counts in particular, but it should not be too difficult to ball-park a few things.

Once I get my own copy of OGRE, I’ll play around with it a bit to figure out some balance stuff. Once I get an idea of some outcome probabilities, I can test it out with some variants, which will be translated to mobile suits.

I’ll probably start off with just a basic Odessa type battle setting, which will limit the types of MS I’ll need to stat. Unless it really works out, I’m going to stick with main-line MS rather than variants.*** BUT, I will include stats for various equipment configurations! For instance, a Zaku could use either the machine gun, the bazooka or Magella-top anti-MS cannon. Hell, I’ll even throw the Gundam Hammer in for good measure.

There are several non-MS tanks that I’m leaving off, but these cover most of the basics that a fan of the show would be familiar with. I’m also going to leave out the air units, like Lugguns & Core Fighters, from the vanilla version, because air superiority fighting is beyond the scope of this game and its engine, though I may include special rules for Magellas.

*: Like, until I played it the other day, I thought the game was about trying to fight against a LITERAL OGRE. I mean, sure, it could work, I guess, but it just shows how out of touch I am!

**:I’d been rewatching Zeta Gundam over the weekend.

***:For all intents and purposes, the Command Type Zaku-II would be mechanically identical, therefore I wouldn’t bother with separate specs for it or the other multiple MS-06 variants.

****: Updated for saying OGRE is Perfect too many times in a single post.