Misha Burnett has recently announced a new anthology project through Cedar Sanderson’s new Sanderley Studios imprint which he will act as editor for.

The focus of the anthology will be stories for young readers. I’m guessing and hoping this means classic boys adventure in the vein of RL Stevenson with some rip-roaring swashbuckling of Dumas and relatable levity of Twain. And maybe the princesses and aliens of Burroughs and Kline.

Submissions are looking for stories that will appeal to both teen boys and girls.

I am looking for exciting adventure stories that showcase (but not preach) virtues, suitable for boys and girls in their teens.

Submissions open on Mar 15th and will run until May 15th.

The ideal story would be between 5,000 and 10,000 words and be action oriented. All genres considered, but exotic settings preferred–Science Fiction and Fantasy, but also Wilderness Survival and Historical Fiction.

Also, be sure to check out Misha Burnett’s Endless Summer, out now in print, ebook, and audiobook!

Apparently Amazon is liquidating their stock of Stark.

The hardcover omnibus with over 100 illustrations is currently just $10.00.

Limit one per customer…

This is 80% off and cheaper than even I can get my hands on them [I used my one purchase to send another copy to our artists] Grab this now! 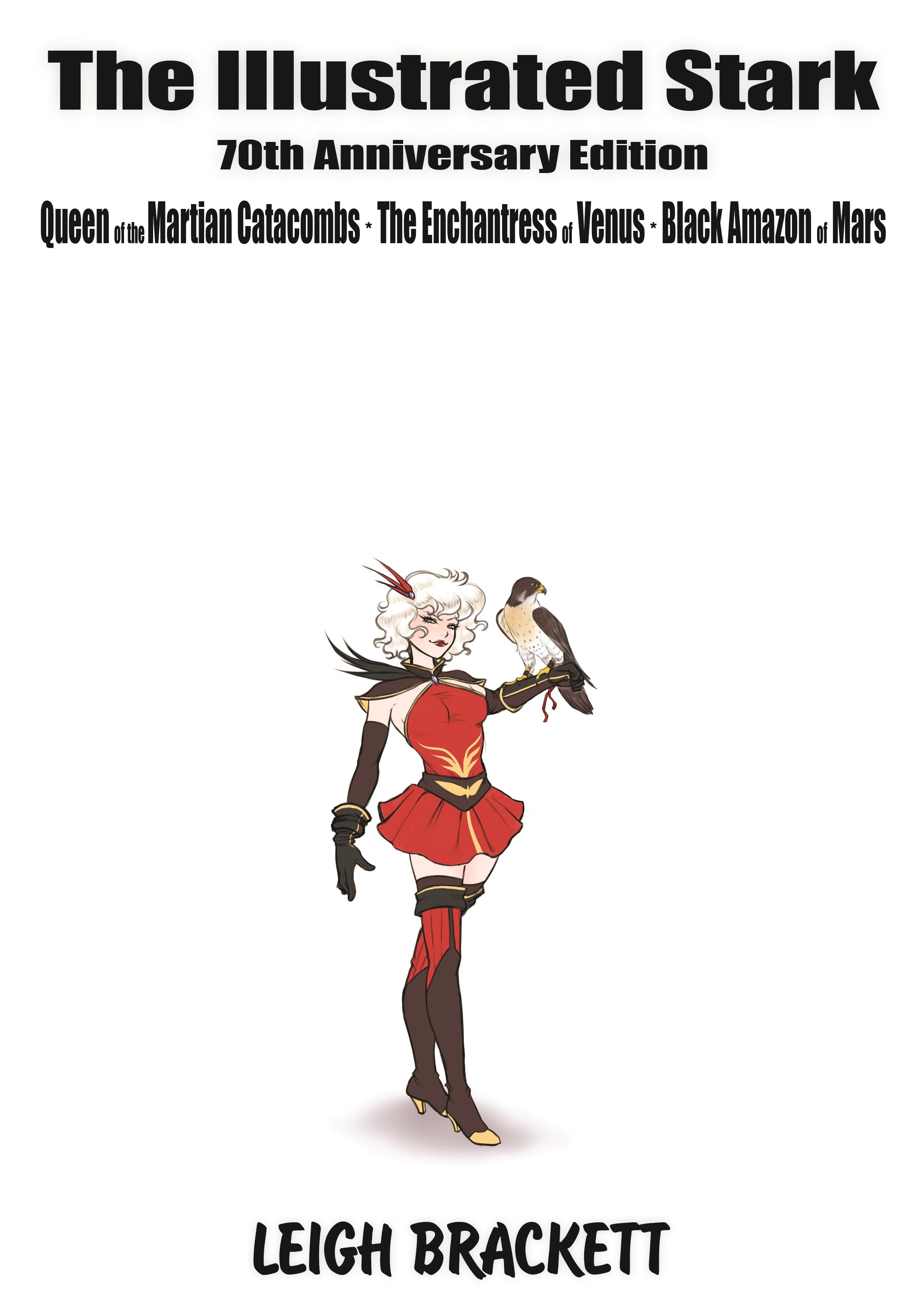 An all new edition of Leigh Brackett’s classic planetary romance, fully illustrated by StarTwo and with a foreword by Jeffro Johnson, author of Appendix N: A Literary History of Dungeons & Dragons! 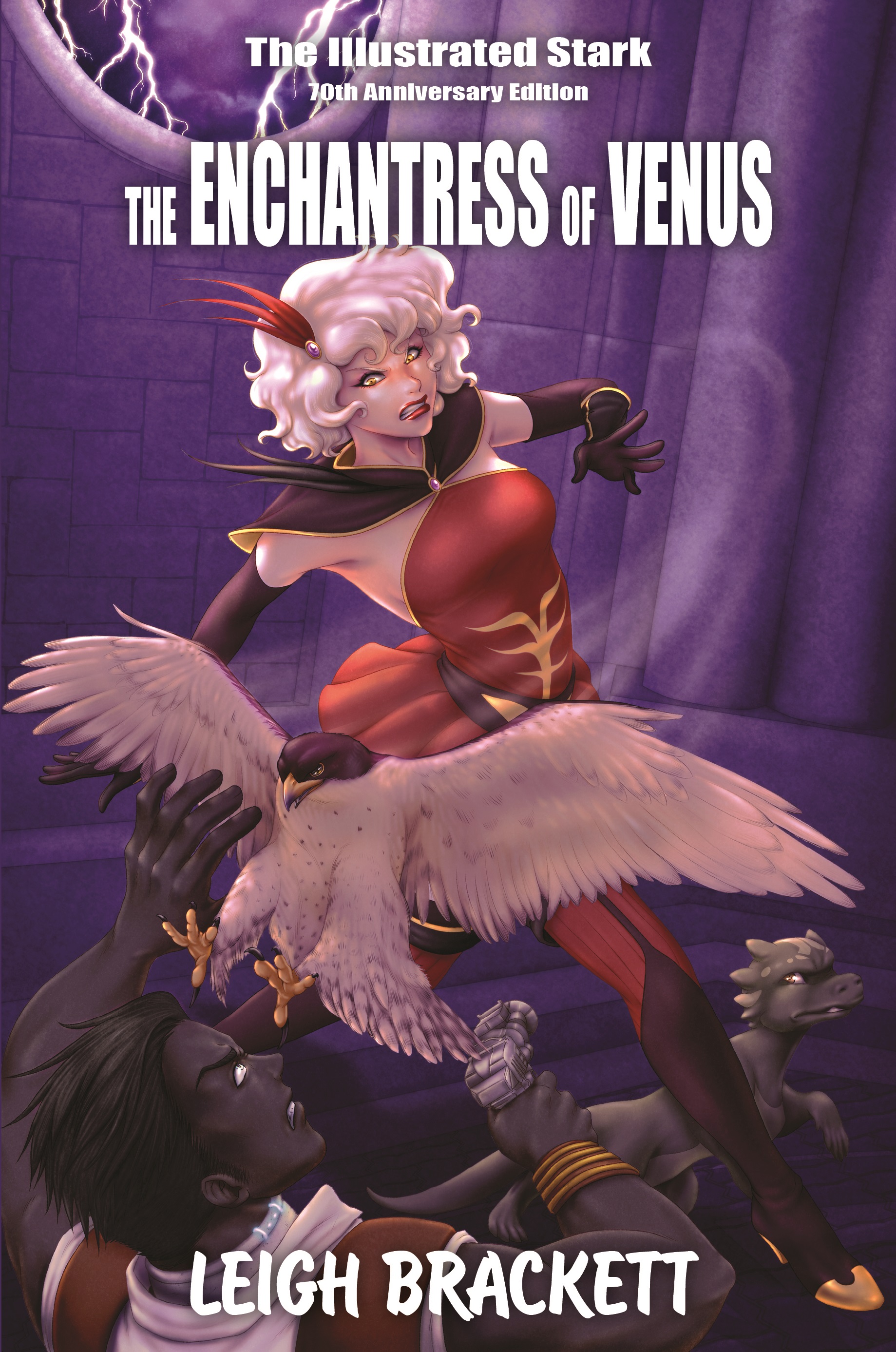 Recently, YA author Laura Moriarty wrote and sent out arcs of a book called American Heart. Its description:

Imagine a United States in which registries and detainment camps for Muslim-Americans are a reality.

Fifteen-year-old Sarah-Mary Williams of Hannibal, Missouri, lives in this world, and though she has strong opinions on almost everything, she isn’t concerned with the internments because she doesn’t know any Muslims. She assumes that everything she reads and sees in the news is true, and that these plans are better for everyone’s safety.

But when she happens upon Sadaf, a Muslim fugitive determined to reach freedom in Canada, Sarah-Mary at first believes she must turn her in. But Sadaf challenges Sarah-Mary’s perceptions of right and wrong, and instead Sarah-Mary decides, with growing conviction, to do all she can to help Sadaf escape.

The two set off on a desperate journey, hitchhiking through the heart of an America that is at times courageous and kind, but always full of tension and danger for anyone deemed suspicious.

Basically a story about how Muslims are people too and rounding people up in camps is a bad thing, probably handled with all of the nuance and subtlety of Margaret Haddix’s cheesy Among the Hidden series.  Not really my kind of thing, probably written as a genuine and heart-felt progressive kumbaya from a well-intentioned liberal YA writer.

Unfortunately, it was less-than-well received by certain individuals on Goodreads:

It’s easy to laugh about this, because progressives have the tendency to eat their own–you can never be progressive enough to satisfy those more progressive than you. So, “ha-ha, look at the lady who tried to virtue signal and got dog-piled for ‘doing it wrong'”, right? Well, it gets more complicated than that.

Moriarty had submitted her book for a Kirkus review, a site that will write reviews for authors on a for-pay basis. Now, paid reviews are sketchy as it is, but this is gonna take the cake!

Originally, Kirkus gave a positive review for Moriarty’s book. It was apparently even reviewed by a Muslim woman who “is an expert in children’s &YA literature and well-versed in the dangers of white savior narratives”, and “she found that American Heart offers a useful warning about the direction we’re headed in as far as racial enmity is concerned.”

So, ironically, Kirkus has chosen to silence a Muslim woman because people disagreed with her review. They’ve backpedaled and thrown up this new review calling the book problematic.

Here’s the thing about reviews. Reviews are always going to be subjective. They are the opinion of the reviewer giving the review based on their experiences, prejudices and believes as they make contact with the content they’re reviewing. So, yeah, even ‘fuck muh whiteness!’ up there is perfectly entitled to her review and I don’t have any real problem with it. But if you’re a review site whose sole purpose is, well, reviewing stuff, then you need to stand by reviewers’ reviews. You may feel like you need to say, as an editor, “I don’t necessarily agree with what this reviewer said,” but to pull down a review and take it out to the woodshed because people have different opinions from the reviewer means that you should probably get out of the reviewing business because your credibility is shot.

I finally gotten around to watching most of the Hunger Games (I’ve seen up through Mocking Jay Pt 1), and I am perplexed.

I am perplexed by my generation’s capacity for double-think that allows for The Hunger Games to be one of the most popular and iconic science fiction sagas of the decade while at the same time millennials are consistently polled as being one of the most progressive and pro-government generations in the last hundred years.

Dystopian science fiction is one of the most popular genres among young adult readers.  The biggest hits today are stories about youth who are suffering under the thumb of an oppressive statist system and rise up against the authoritarian status quo to save the day.  But going by what the web-papers are telling me, youth today are ready to line up behind whatever cradle-to-graver they think will give them free-stuff and a safe-space where they don’t have to worry about free speech.  How can this be?

Well, take a look at one of the prime and popular examples of double-think today:

-The police are out of control; the racist American police state is murdering young black men in the streets and no one is safe.

-Only police should be allowed to have guns, because they are the only ones responsible enough to have and use them. 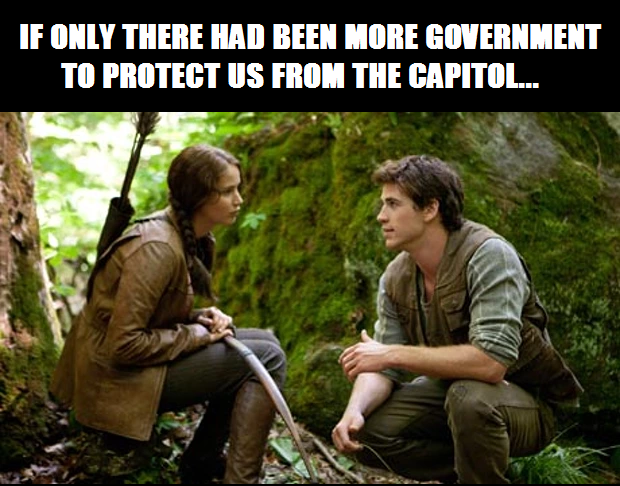 But about the Hunger Games…

Now, I can’t say with any certainty what the political leanings were of the Capitol storm troopers who shot that old man in the face in Catching Fire, but I’m pretty sure they weren’t minarchist/libertarian.

Panem in the Hunger Games is explicitly a redistributive state communist system in which the specialized economic output of each district is seized by an authoritarian central government, and what does not go to benefit the ruling political class in the Capitol is redistributed back to the various districts.  Everyone outside of the Capitol is hungry, and their labor is not their own.  Meanwhile, the Capitol is flush with all of the resources that it has charged itself with redistributing.  The ruling class and working class are hopelessly disconnected, and everyone in the Capitol is part of the machinery of this non-voluntary redistribution of labor and resources, the Beating Heart, as President Snow describes it.

I really wish I could see some sort of political Venn diagram of Hunger Games fans, because I may just be talking out of my ass here.  But you’d think that a generation obsessed with stories about how youth fight against totalitarian regimes would not also be the ones clamoring for statism.  Then again, back in my punk rock days, I was around plenty of folks who thought that Anarchy meant “The government gives me free stuff while no one arrests me for destruction of private property”.

If anything, the message of the Hunger Games is that it’s time to burn Washington to the ground and string up the political ruling class.  No more redistribution of the Districts’ Labor!  No more politicians getting wealthy off the backs of private citizens!  No more fear of speaking one’s mind lest political hacks and apparatchiks destroy you!  No more playing regional political and economic interests against one another (as embodied in the games themselves) to keep them subservient to a vampiric Federal government!

I’m not saying that folks should be willing to rise up and give their lives to violently throw off the yoke of an all-powerful oppressive government, but I get the impression that Suzanne Collins is!