We’ve got  10 slots left for advertisements in Cirsova #8!

We’re trying to get space filled by this Friday.

Advertisement images should be 300 dpi, with the following measurements:

128 Subscribers will be receiving copies.

Advertisers will receive PDF copies of the issue featuring their advertisement. To keep advertising costs low, we are no longer including physical copies with ad purchase-you are only paying for your adspace. If you would like physical copies, you may add $10 for a single copy or $30 for a bundle of 5.

Contact us at cirsova at yahoo dot com for details.

Since my players have only explored the north part of the second level of the dungeon, I’ll avoid posting it here for now. But I will eventually, I promise.

This is a faction sub-dungeon off the north of second level. It’s the monastery’s library and at one time, it boasted a rather impressive collection. Some of it is still intact. The large collection of knowledge attracted a clan of Mage Spiders who have peacefully inhabited the ruin for nearly 200 years. Content to study the old scrolls and tomes, none have bothered the nearby village in all their time occupying the site.

If cleared out, other inhabitants from the wild or brigands might take up occupation here in this easily defended complex.

Note that the southern defenses are included on a different map. Because of the open layout of the interior, spiderlings will be quick to spread the word about intruders so that the other spiders can mount a coordinated defense. The exits lead to the north side of the hill; it’s an easy climb back up to the historical marker the level 1 entrance and only adds maybe 5-10 minutes or so to the walk back to town. 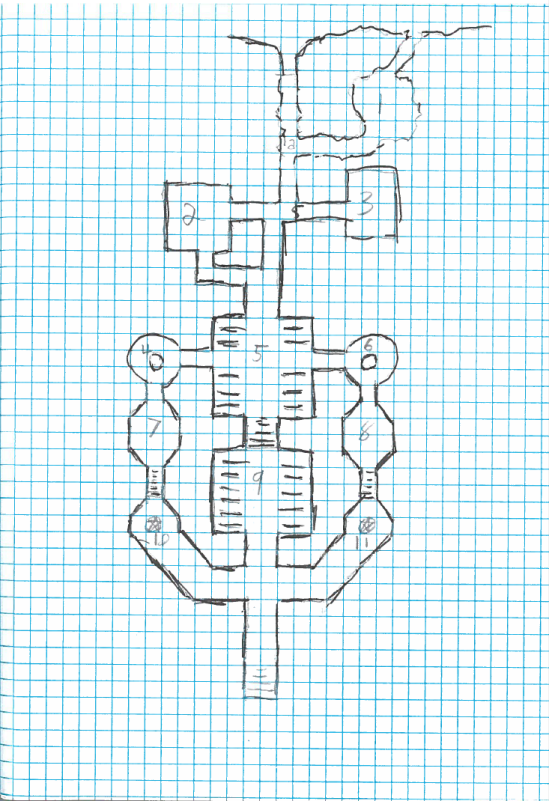 I’ve been meaning to post these, and now that there’s no chance that the players might be seeing portions of the dungeon that they haven’t explored yet, I can finally start.

These will give you an idea of what I’m working with, and I’m copying my key notes word for word from my legal pad. The great thing about this dungeon has been I’ve managed to run most of my sessions with virtually no prep-work beyond what’s already written down on my notepad. Mostly, I’ve just been winging it, which is good, because I haven’t had time to do much else.

I’ll note that the first floor is rather empty at the moment; this is meant to be an exploration-themed game, so I didn’t want it to be stacked floor to ceiling with monsters. Plus, as in-game time progresses, the side tunnels will be excavated and vagrants or monsters might start taking up residence in this upper level.

Short version of the setting:

-Big war between wizards 500 years ago.
-Monastery was built on the site of… something important that happened during the war.
-300-400 years ago, the monastery was buried by “rain of dirt” (probably a volcano)
-200-300 years ago, a smaller monastery was built on the origin site; it too was buried by a “rain of dirt”.
– < 100 years ago, small town was founded near the site; rather than build another monastery, they put a historical marker on top of the hill underneath which the ruins are buried.
-Present day: at the founding day festival, history wonks are showing up to see the marker because it’s the anniversary of the end of the wizard war, so it’s a bigger deal than usual. The young son of a local innkeeper is out playing on top of the hill when he falls down a sinkhole and into the upper gallery of the newer temple. 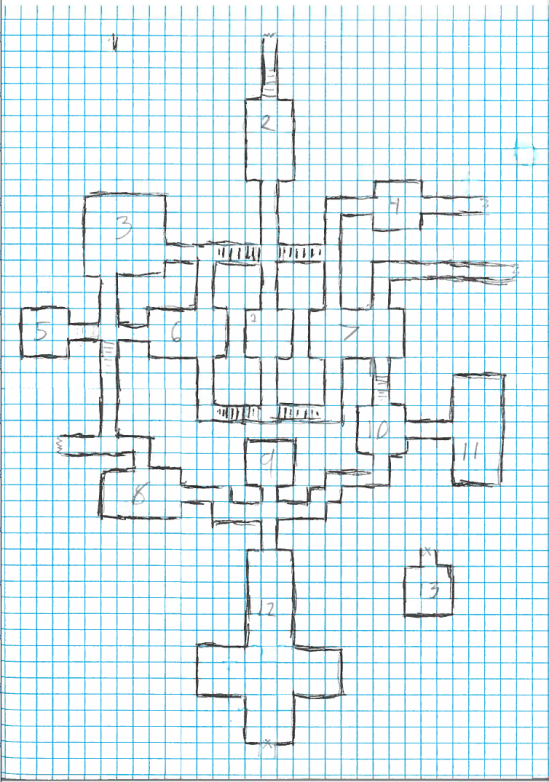 The thief who survived the last session with over 7k banked XP hired some new companions and low-level adventurers to guard the known entrances to the dungeon.

Rather than take lots of time to prepare and coordinate, they opted to go straight back into the dungeon the very next day. Because it took them the better part of the morning to resolve the previous session’s adventure and recruit new party members, they didn’t have their new guard posted before the rival adventuring party had a chance to start poking around the ruins of the buried monastery.

My players decided to try to talk things out with the rival party; it was nominally led by a cleric of the same local order as the PC who’d died in the TPK session. Cleric convinced the party that they were mostly looking for items of religious significance and were tasked with surveying the lower ruins. They wouldn’t join up as henchmen/hirelings, but would be willing to exchange information. Cleric also warned about the artificer’s workshop supposedly located off the south end of the abbey.

Satisfied that the party had bought their story, the Cleric’s party continued their looting while the players found the back entrance to the East Chapel’s relic room. The fighter made his poison check to open the reliquary cabinet and the party retrieved the blessed shield and mace within. While they could’ve kept the cabinet, the fighter smashed it up instead, costing them a decent chunk of loot XP. In a room off one of the naves, they found another +1 mace, and then, in the narthex, they found the secret passage to a supply room.

The supply room was haunted, and while the party leader was investigating the boxes, three faded wraiths rose up and attacked. (“I didn’t touch the chest, though!” “It wasn’t actually a trap. It was a ghost.”) The faded wraiths couldn’t get hits on the fighters, but they DID kill party leader before they were dispatched.

And just like that, 7000+ party XP was gone with one character.

Now, they DID have a chance to save him. There were no wounds; he’d just stopped breathing. He expired right next to a box full of holy water and holy symbols–I would’ve allowed the players to use those to revive him, since he’d been killed by monk ghosts; if the party had a cleric, they would’ve known this could’ve worked. Also chest compressions could’ve worked. Instead, they dragged him back to town, where the healer said he was probably too far gone to help.

On the plus side, one of the thieves who missed the TPK of the second session got enough XP to reach level 2.

I had a dream the other night that I was at a Ginsu Wives show. I haven’t seen them since they opened for MLWTTKK (2012 maybe?). I have this dream less than 48 hours after someone uploaded an entire show to youtube, and I found it the next morning. Enjoy.

Things have been… busy…

I’m almost done with the last of our copy editors’ notes on issue 8. I’ve gotta give a special shout out to those guys, because I feel like the magazine would be in the toilet without their help. I’ve been able to start paying them, but I don’t pay them nearly enough for the amount of work they put in to making Cirsova a great zine

I should have the art for both issues 8 and 9 fairly soon. Issue 8 will be coming out on schedule, so yay for that!

I’ve got a big project coming down the pipeline that I’ll be able to talk more about soon. If I don’t have technical issues again, I’ll be announcing it on Saturday on Geek Gab.

The IP team at TeeSpring has taken down the pirated designs. The only place you can buy legit Cirsova merch is TeePublic. (And it’s currently on sale for $6 off Tees).

I keep forgetting to grab my notes to scan them, but I’m hoping to upload my dungeon crawl I’ve been running.

Final friendly reminder, if you have read us and haven’t left a review, please take a minute to do so!

I’ve reviewed a LOT of science fiction stories since the start of the year. Here’s a handy link list you can use to catch up on my column at Castalia House:

Be sure to tune into Castalia House this friday when I continue to dump on the September 1949 issue of Astounding Science Fiction!

So far, reviews for our 7th issue have been somewhat mixed. Mostly positive, but still mixed.

Tangent Online’s reviews of Cirsova have been a bit of a crapshoot, depending largely on which reviewer ends up with a copy. Some of their reviewers have loved us, while others, like in the case of our latest issue, have been dismissive of us as ‘pulp’ with the ‘if you like that sort of thing’.

Jon Mollison has been doing a story-by-story review of the issue, and it’s been fairly positive so far.

Fletcher Vredenburgh gives this issue a tough, but fair, review as probably his least favorite of our run. Fletch was one of our earliest supporters outside of our immediate circles and given us great reviews in the past, so his criticisms of our new directions are ones we’ll seriously consider. But he’s also more a Sword & Sorcery guy, so his bias against Raygun Romance and Sword & Planet will be weighted accordingly.

Honestly, my growing bored with straight-up Sword & Sorcery may have adversely affected my story selections of those pieces that would best appeal to that crowd. The truth is, I’m not sure what direction I want to go yet in the future. 2018 will be sort of a “throw stuff against the wall and see what sticks” year for us. Not that I’m trying to break the mold, but I wanted to try some new things. Downside to all of the stories being a lock for the year, I’m not going to be able to make any mid-year course corrections.

Still, the only way we’ll be able to improve things or keep doing whatever it is you’re enjoying is if you leave us review!

I’m not harping on this cuz “muh algorithm”; I genuinely want to know what you guys think. Whose stories do you want more of (sorry, I can’t just beat stories out Schuyler Hernstrom), and whose stories just don’t work for you? Are there characters you want to back? Are there series you’ve gotten bored with? Let us know!