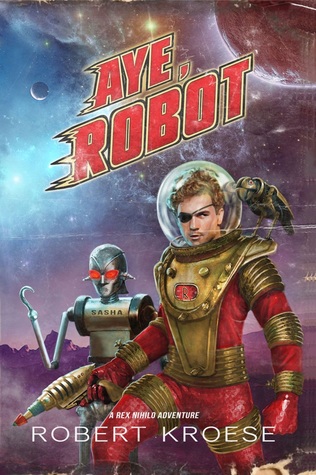 While I enjoyed the first one, it did push me to the limits of my tolerance for spoof and parody in SFF – Starship Grifters got away with a lot I wouldn’t normally forgive because Kroese’s such a damn good and damn funny writer.

Starship Grifters’ sequel, Aye, Robot, was much more satire than parody. With the basic level Star Wars stuff out of the way from the first book, we’re left with a much more interesting and less predictable story. All of the top notch humor and brilliant writing from the first book was still there, but its move into unfamiliar territory with its narrative made Aye, Robot even more enjoyable.

Rex is still a Zapp Branniganesque scamp, but he has a few moments of real genius shine through; enough that one might question if some of his mannerisms aren’t just an elaborate act to throw people off. The secondary characters of Boggs and Donny were far less useless than the companions from the first book, so while entertaining in some of their antics, they helped keep Aye, Robot from being another “one sane man” (or one sane robot, in Sasha’s case) story. Even Vlaak managed to be a bit interesting as a character this time around (as opposed to merely a flamboyant cross between Darth Vader and Falco).

In short, while I liked Starship Grifters, Aye, Robot was a much better and much more enjoyable book, even if the humor was not quite as machine-gun-like as in the previous.

I was also happy that Kroese included his Pepper Melange novella, The Yanthus Prime Job, as a bonus. I’d gotten an ebook of it, but honestly, I probably would’ve never gotten around to reading it had it not been in print. While still including some of Kroese’s brilliant humor, YPJ was a much more straight-forward sci-fi heist story, which I liked a lot. Pepper is a tough SF dame in the older mold – smart, clever, quick thinking on her feet, and creative in her approaches to problems, rather than a 5’2″ war machine in pleather. She was one of the better parts in Starship Grifters and took a lot of the burden off Sasha from being the one competent character, so it was fun to see her in her own story. FWIW, The Yanthus Prime Job is a lot closer to the sort of fiction that I, myself, am looking to buy for Cirsova than either Starship Grifters or Aye, Robot (even though they were both great). YPJ shows me that Kroese’s talents go way beyond clever wordplay interspersed with his nod-giving action SF; in a fairly silly setting, he’s able to tell a straight-forward but intense story that showcases his short fiction chops.

I’m already looking forward to the next installment in the Nihilo-verse, but I think I’ll be looking into more of Kroese’s fiction before then, when I get a chance.

Also, thanks for putting a ray gun in Rex’s hand on the cover. He looked kinda weird just standing there hands- on the last one. 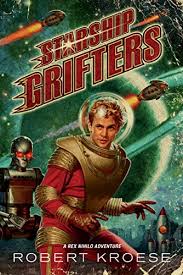 *: I backed the Kickstarter for a softcover of the first book. I think that Robert may have sent me a copy of Aye, Robot for having shilled for him (unpaid, of course) on Twitter. If that’s the case, thanks, Robert, I really appreciated it!

4 responses to “A Very Short Review of Aye, Robot and The Yanthus Prime Job”