As some of you know, Cirsova will be publishing a “lost” Tarzan story in our spring issue. Michael Tierney tells in his own words how this story came into being. (Originally published here on Michael’s Facebook).

Update! The original manuscript’s whereabouts has resurfaced as of Jan 17, 2019; Bill Hillman of ERBzine.com has claimed that the original handwritten manuscript is in his possession. Corrected text is marked within the original:

It’s an old question of, if you could, who you would visit from the past? Take that question a step further and ask if you could collaborate with literary giant on their greatest creation, who and what would it be?

Here’s my answer: Young Tarzan and the Mysterious She.
Releases March 2019 from Cirsova magazine.

The fragment I worked with was first hand-written by Edgar Rice Burroughs in 1930. It was left unfinished, and then lay hidden in his safe for decades after his death. When it was rediscovered, many well-known writers were offered the chance to complete the story, but there were elements that they considered problematic, and they passed.

Around the year 2000, ERB’s grandson, Danton Burroughs, offered me the chance. I found the problems to be opportunities to explain what I considered to be inconsistencies in the jungle lord’s established history.

But on the day of Danton’s greatest accomplishment, when he became President of his grandfather’s company, Edgar Rice Burroughs Inc., there was a fire in the offices that destroyed many of his father, John Coleman Burroughs’ paintings–some of them were lost forever without a record. Danton tragically died that night of a heart attack.

What I didn’t learn until recently was that the fire left ERB, Inc. with no record of the story. Danton took his knowledge with him, and the fragment was essentially lost to the company his Grandfather founded.

Fortunately, I still had my digital files, and the original fragment was discovered after the announcement of this publication.

Danton had sent it to be transcribed into digital format by Bill Hillman, webmaster of ERBzine.com, who announced this very day that he still has it.

While I was creating the Edgar Rice Burroughs 100 Year Art Chronology, I’d asked current President Jim Sullos for an opportunity to do something with the story. What I didn’t realize until recently was that he thought this was all my creation. We didn’t both put all the pieces together until just a few weeks ago.

That’s the story behind the story of Young Tarzan and the Mysterious She. 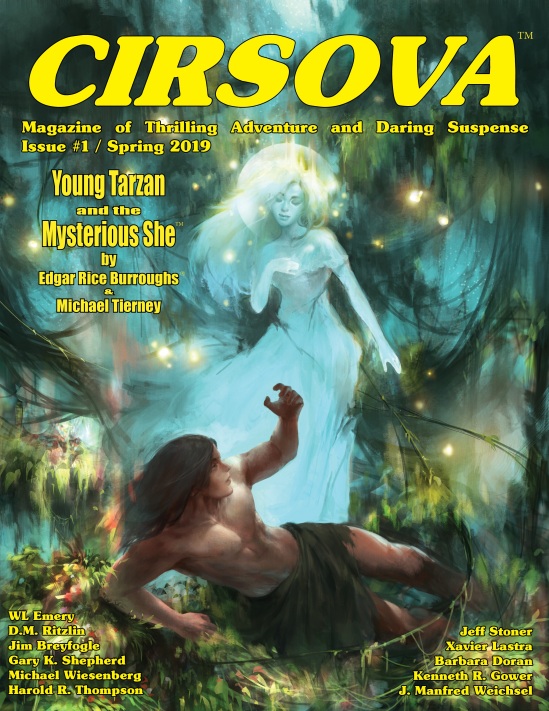 Michael Tierney has been a regular contributor to Cirsova Magazine, whose stories Shark Fighter, The Bears of 1812, The Criteria for Admission Into the Galactic Community, and Jack’s Basement have been published in Cirsova 2, 5, 7, and 9 respectively, and his 4-volume Edgar Rice Burroughs’ 100 Year Art Chronology was published last year by Chenault & Gray. Last Summer, Cirsova published his sold-out Wild Stars Novella, Wild Stars III: Time Warmageddon.

Cirsova’s Spring issue featuring Young Tarzan and the Mysterious She will be out March 15th.

Print and other digital formats will be available for pre-order soon.

Also, don’t forget that we have Duel Visions, a new anthology of Weird New Wave Horror from Misha Burnett and Louise Sorensen, coming out in February.

16 responses to “Young Tarzan and the Mysterious She”