The Spring issue of the magazine has Kat and Mangos embarking on their 8th adventure overall and the 3rd in what will be the second “volume” of Tales of the Mongoose and Meerkat.

In The Grain Merchant of Alomar, our pair of swords for hire are beginning to settle in. They’ve reached the city of Alomar, a cosmopolitan metropolis where anything (and anyone) can be bought and sold, and coin is king.

They’ve finally managed to save up some money (or Kat has, anyway–Mangos has squandered a lot of his on good food and drink and a replacement for the sword he lost back in Sword of the Mongoose) and are hoping that they’ve established a bit of a reputation as mercenary adventurers. Unfortunately, Alomar is a big city, and the Mongoose and Meerkat are still small time.

While they’re trying to get gigs lined up, they’re squatting in an unused wing of a manor owned by a wealthy merchant… who hires them without even knowing they’re living under his roof!

This will be the first time a Mongoose and Meerkat story will appear in Cirsova magazine with illustration [by the talented DarkFilly, who illustrated Volume 1].

Also, it’s still in production, but we’ve commissioned an audiobook edition of Pursuit Without Asking, which should be available by mid-spring. It’s read by Erin Michele Gabbard, who is not only a fantastic reader, she sounds just like we imagined Kat to sound like! More news on that soon, but in the meantime, please back the pre-order for our 5th Anniversary Issue!

One of the things we did with our Mongoose and Meerkat project with Jim Breyfogle was create D&D stats for a few of the stories so they could be run for B/X.

Something I’d love to do for a future Kickstarter would be include some minis for Mangos and Kat. The idea had me playing around with HeroForge, which is a site that allows you to create custom one-off minis for tabletop.

The only problem is that HeroForge DOES NOT allow commercial licensing, so even if I made some awesome minis using their tools, we wouldn’t be able to offer them as part of a Kickstarter or anything else.

That didn’t stop me from coming up with these as sort of a ‘proof of concept’ based on Dark Filly’s designs. If we’re able to, in the future, we’ll have Filly do some model art and get a 3D modeler to make us some 3D models for real minis. In the meantime, I thought these were kinda cool.

Tales of the Mongoose and Meerkat Volume 1: Pursuit Without Asking, by Jim Breyfogle, is out now on Amazon!

Already read Tales volume 1? The adventure continues in The Golden Pearl, in the Spring issue of Cirsova, out now!

Hunt of the Mine Worm will be out in December in our winter issue.

I can now confirm that Cirsova Publishing has acquired the rights to the entire remaining Mongoose & Meerkat series!

We will begin serializing it one story per issue, beginning with Hunt of the Mine Worm in the winter issue out this December, until all 18 stories in the cycle have run.

If you JUST got into Jim Breyfogle’s Mongoose & Meerkat via our kickstarter for Pursuit Without Asking and want to keep on top of things, the next story in the sequence, The Golden Pearl, was the cover story of our spring issue.

Read The Golden Pearl in the Spring Issue!

Missed the Kickstarter? Tales of the Mongoose and Meerkat is on Amazon!

Did you miss the Kickstarter? Wishing you got your hands on one of those books that people are showing off all over social media?

Well, you will still have a chance to get your hands on a copy!

The eBook and retail paperback edition are available for pre-order now and will be out August 3rd. 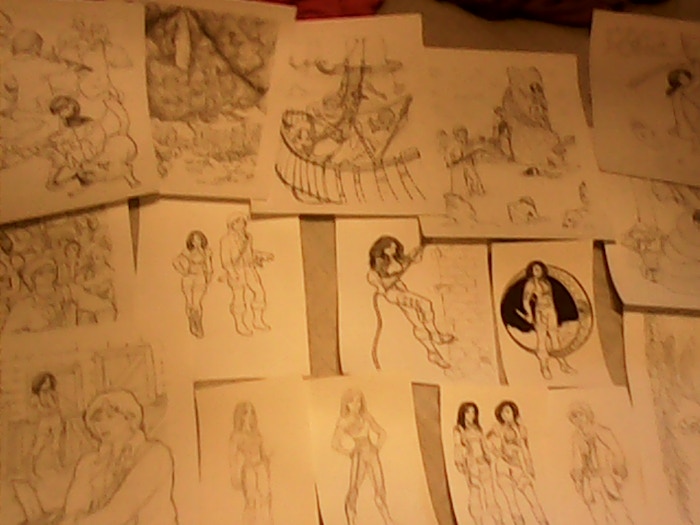 I spent a pretty good chunk of the evening working on bonus content for Mongoose & Meerkat!

The result is roughly 3,000 words of gaming content, including:

I’ll be putting the finishing touches on it soon then will be running it by Jim Breyfogle for approval.

Once he gives it the OK, it will be added to the Appendix of the hardcover.

In fact, we’ll be adding all of the bonus material to the hardcover [except for the list of backer names, of course] this week, at which point the hardcover will be officially Almost DoneTM.

Once we have a page-count, we can do the layout for the hardcover’s dust-jacket.

No promises, but this could begin fulfilling by as early as June!

We’re half-way through our crowdfund period, and at this time, we’ve got $250 to reach our $3k stretch goal to create OSR content based on the first five Mongoose & Meerkat adventures.

We could knock this out with one art-tier backer! Back on Kickstarter today!

We appreciate all of the support we’ve been giving during this rough time. This is a huge project for us and for our creative team, who’s been amazing.

We’d love to sell some of these original pieces of Mongoose & Meerkat interior artwork, because the more of these we sell, the bigger a check we can write to our artist, DarkFilly, who has graciously offered us a split on these.

If we sell all of the original art pieces and the opportunities to be written into the upcoming Mongoose & Meerkat stories, this project could easily reach over $5k, which would put Cirsova in a great position for 2021.

Bounding Into Comics has an interview we did with DarkFilly, our illustrator for Jim Breyfogle’s Mongoose and Meerkat Vol 1: Pursuit Without Asking.

The interview can be read here.

Thank you to all of our backers so far!

Cirsova author Jim Breyfogle was on Geek Gab over the weekend, talking about the Mongoose & Meerkat project and other fun stuff.

Check it out!  And once you do, be sure to back the kickstarter today!

We’ve met our $2k goal and are well on our way to meeting our initial $3k stretch goal to create gaming content based on these adventures.

Thanks to everyone who’s backed so far! We couldn’t do it without you!

[If you haven’t backed yet, you’ve still got time, but there’s no time like the present!]

DarkFilly did this promo piece to celebrate.

If we hit $3k, I’ll be writing up RPG content based on the first five stories in case you’d like to try incorporating some of Mongoose & Meerkat’s adventures at your game table. This will be included in the Appendix of the Hardcover format.

These won’t be full modules, but the sort of statblocks and suggestions necessary to get you started on your own. For an example of my design philosophy on converting short adventure fiction to tabletop scenarios, check out this old review I did for Basil Wells’ Raiders of the Second Moon. https://cirsova.wordpress.com/2019/06/14/short-reviews-raiders-of-the-second-moon-by-basil-wells-as-gene-ellerman/